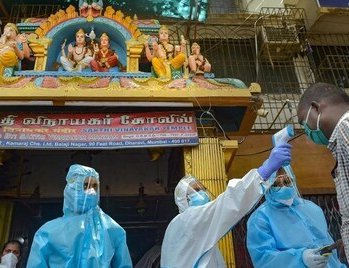 The number of confirmed Covid-19 cases in Maharashtra, the Indian state with the most cases, crossed that of China on Sunday.

Around 48.37 per cent of Covid-19 patients in India have recovered so far, a MoHFW official claimed Mumbai: BMC says that no new cases of infection have been reported from Dharavi in the last six days

For the fifth day in a row, India recorded a spike of over 9,000 in the number of new novel coronavirus infections reported from across the country.

The number of confirmed Covid-19 cases in Maharashtra, the Indian state with the most cases, crossed that of China on Sunday with a tally of 85,975. Maharashtra's Health Department reported 3,007 new cases on June 7.

Even as confirmed cases continue to rise rapidly, shopping malls and places of worship are gearing up to reopen from Monday while abiding by SOPs part of the Ministry of Home Affairs' "Unlock-1" notification. This is part of the Government of India's three-phased plan to gradually reverse the nationwide lockdown first enforced on March 25 by Prime Minister Narendra Modi.

Chief Minister K Palaniswami said on Sunday that 86 per cent of Tamil Nadu's Covid-19 cases have been found to be asymptomatic. Tamil Nadu has a lower mortality rate than any other Indian state and even some other countries, CM Palaniswami said, adding that the state's recovery rate was the best in the country.

Odisha government has decided to extend closure of shopping malls and places of worship till June 30. Maharashtra is also, yet to take a decision in this regard.

Priests in Mathura met with the district administration and said they are in favour of extending the closure of places of worship, including the 'Banke Bihari' temple in Vrindavan till April 30.

Several states such as Karnataka, Punjab, and Uttar Pradesh have issued specific SOPs for places of worship and shopping malls. These include regular cleaning and mandatory social distancing. Some have even taken to the token system to ensure no crowding.

In an order on Sunday, the Union Ministry of Culture issued an order allowing 820 centrally protected monuments under the care of the Archeological Survey of India (ASI) to reopen from June 8. The list did not include the Taj Mahal in Agra among others.

Minister Prahlad Patel clarified that the list includes only those monuments which also serve as places of worship.

Residents of Mumbai, the city worst-hit by the pandemic, were seen on Marine Drive, the city's iconic boulevard on Sunday. While State Reserve Police Force (SPRF) personnel could be spotted urging locals to retain social distance, little heed was paid to their advisory.

Trump, who has been accused of over-militarising the response to the protests, says he has ordered the troops home.

The Minneapolis city council has said it wants to disband the city's police department, after days of protests over the killing of George Floyd, an unarmed Black man who died after a city police officer knelt on his neck for nearly nine minutes on May 25.

US President Donald Trump has ordered the withdrawal of National Guard troops from the streets of Washington, DC

Protesters have also taken to the streets across the world - from the UK to Spain, Italy and Australia - as demonstrations against police brutality and racism entered their 13th day. While some clashes were reported, they remained mostly peaceful.

Hundreds of mourners gathered in North Carolina on Saturday for a memorial service for Floyd, the second of three events currently planned.

Compiled from The Indian Express, India Today and The Hindu

41,383 Covid Cases Reported In India By Agencies 2 days ago