Challenges And Opportunities Of Local Governments In And After The Pandemic

With the detection of a couple of virus cases in Nepal, the Government of Nepal issued one of the strictest lockdown measures from 24th March. All movements except emergency were restricted. 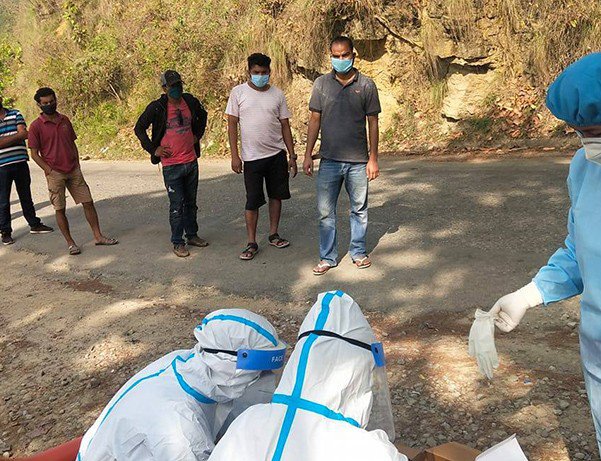 “The Local governments are acting as Brahma- Bishnu-Maheshwor in this pandemic situation.” During a webinar, a deputy mayor compares the local governments with the Holy Trinity of Hinduism, in the context of managing the COVID-19 crisis in their jurisdiction. Mayors from other municipalities who participated in the webinar reiterated the same experiences as they are performing multiple roles to combat the multifaceted crises associated with COVID. While these mayors, first publicly elected representatives in decades, are grappling to contain the spread of the virus imposing lockdowns and also make livelihood possible for their constituency, they expressed high optimism for post-pandemic recovery and prosperity. Mayors and deputy mayors from five different municipalities affected by COVID shared the screen in a regular discussion series-‘Nepali Society In and After the Pandemic’ organized by Southasia Institute of Advanced Studies. Based on the aforementioned discussion and author’s communication with some of the local government representatives, this article captures the challenges being faced by local governments and the opportunities they see after the COVID pandemic.

With the detection of a couple of virus cases in Nepal, the Government of Nepal issued one of the strictest lockdown measures from 24th March. All movements except emergency were restricted. Along with the increasing cases of virus infection, the role of local governments in combating COVID 19 and facilitating the livelihood of the people became highly crucial. From enforcing lockdown measures, smoothening the access to emergency and essential services, building quarantines, distributing relief to low-income families to bringing back people stranded in various places both inside and outside the national border. Even now, when the numbers of COVID cases have steadily risen to more than 3000, the local governments across the country are expanding the capacity of quarantine facility, virus testing, contact tracing and urging people to take precautions. Moreover, turning the lockdown into an opportunity, they have restarted infrastructure development activities creating opportunities for the daily waged workers to earn a livelihood. All this is happening while the annual policy and programs, and budget of the local government for the next fiscal year are due to be released on 24th June.

The multi-faceted crisis created by COVID has demanded multifarious roles from the local government, leaving the local governments to deal with challenges witnessed never before. One of the mayors was candid in his response when he said that the local governments were not prepared financially, technologically, or with the human resources to deal with the crisis of this nature. The capacities of the elected representatives and the resources they have in their disposal are limited. The first challenge is the survival of daily waged workers who had no work owing to the lockdowns. Laborers were provided with food relief but in places like Janakpur municipality that has shortfall on production but a high population, food had to be sought from nearby bigger markets like Biratnagar.

The biggest of all challenges is the management of returnee migrants –from within Nepal, India and other third countries, who are likely to have contracted the infection. The mayor from the Waling municipality reported that about 1100 people are expected to be back,250 of which have come back and 5 were diagnosed with the virus. Similarly, in Janakpur Sub metropolitan city – 30,000 people are expected to be back. As per the Ministry of Home Affairs directives, these people need to spend at least 2 weeks in quarantine, which if ill-managed can spread the infection rather than containing it. Hence, assuring minimum standard for prevention has been a real challenge as the local governments have limited financial resources and so is the availability of spacious buildings to maintain physical distance. One of the mayors shared that ‘the federal government sent the guidelines for quarantine that requires a huge amount of budget which local governments cannot afford. The budget is pulled from other headings which is against the budgetary regulation”. Other mayors present in the discussion also reiterated that the federal government has the responsibility delegated but not the budget to perform the same..

Additionally, local governments are also facing challenges in maintaining community tolerance as communities in some parts of the country are turning hostile towards the infected individuals and healthcare workers in the frontline. Dharan Sub metropolitan city attempted to build quarantines in the hotels and guesthouses however, the resistance of local residents arguing that they will be more vulnerable from the people staying in these quarantines, compelled the municipality to drop the idea. Likewise, 5 corona infected people from Waling who were referred to Pokhara and Kathmandu for the treatment were returned back as the hospitals did not admit them citing lack of Personal Protection Equipment (PPE).

In addition to these immediate challenges, local governments have also to deal with broader social and economic repercussions of the pandemic. This three-month lockdown has already affected multiple sectors resulting to loss of livelihood opportunities of the people. The agriculture sector has been hyped as the panacea COVID created ailings. Nonetheless, in the new normal post-pandemic, retaining the returnee migrants and encouraging them to work in the agriculture sector by creating a conducive environment is not an easy job. Mayor of Janakpur sub-metropolitan city shared that ‘returnee are reluctant to go back to agriculture and most of the returnee are unskilled and have very limited capacity to adopt any off-farm activities’.

Despite these multiple challenges, this COVID crisis has also created opportunities for the local governments. As they are now preparing for the policy and programs and the budget for the next fiscal year, this is the most appropriate time to learn from this crisis and plan accordingly for the new fiscal year. The mayors and deputy mayors univocally expressed that managing the crisis has also become a learning opportunity – and the focus of development is likely to shift from predominant infra-structure development to enabling of health and economic sector. The mayor of Waling succinctly put it, “we have learned to be courageous in our action and going forward we have to act accordingly”.

The national budget for the new fiscal year has identified agriculture as one of the most important sectors which gives an opportunity for local government to invest more in innovative ideas on production and also making use of the additional human resource in the form of returnee migrants. Returnee migrants have not returned alone rather they have brought their hard-earned money, technical skills, the experience of hard work, entrepreneurship, and respect for all kinds of work. These will be opportunities for local governments to capitalize on creating employment opportunities and become self-reliant.

Local governments should take are taking a two-pronged approach for immediate coping and longer-term strategies for employment generation and economic revival. As suggested in the discussion, they have to provision the private and home quarantine without delay. This will help them to manage the high number of migrants returning in days to come. In addition, keeping their record at the entry regarding the skills, experiences and possible funds they possess, their interest and expectations in the post-pandemic situation will facilitate them for the need-based planning.. Efficient contract tracing and mass testing is another immediate necessity of utmost importance.

As a long term plan, the policy and programs of the local government can no longer follow business as usual. They can further strengthen the initiatives such as innovation labs that some of them have initiated. The Waling municipality is already testing ultrasonic sound to chase monkeys away from the farm. Promotion of these types of activities, such as start-ups with the subsidy, promotion of value-added agri-products and linkages with the urban markets is essential to encourage returnee migrants for the small scale investment and employment generation at the local level.

Agriculture has been the most preferred sector in the post COVID period. For this, local government can promote group farming, provide incentives to the farmers based on the volume of their production and matching fund to the entrepreneurs with subsidized interest rates coupled with strategies to discourage intermediaries. In addition, local governments can capitalize on the skills of returnee migrants and promote off-farm activities. This is particularly relevant to the municipalities like Dharan and Janakpur where agricultural land is limited and the population is high.

The pandemic has become an opportunity for the newly formed local governments to establish the need for a powerful local government. While they are working with limited resources and technical capabilities, they have been learning great lessons and paving their ways towards developing their program and budget taking account of the pandemic. Despite dealing with shortcomings, the municipalities are taking proactive action to coordinate with the province and federal levels. While it might take some time for the federal government to establish effective support systems to the local bodies, the local governments can in the meantime, introspect and look for resources and opportunities within their own jurisdiction. It could be in the form of public-private partnership, the revival of traditional, indigenous self-help groups like-guthi or partnering with universities and academicians for innovations- and maybe create robust crisis management and system revival modality which can also inform the federal government.

Authors are researchers at Southasia Institute of Advanced Studies

Authors are the researchers at Southasia Institute of Advanced Studies - SIAS).

EU And Nepal To Close The NEARR Facility By NEW SPOTLIGHT ONLINE 2 days, 2 hours ago

MELAMCHI PROJECT Water At The Tap By Keshab Poudel 1 week, 2 days ago

STATUE OF LATE DILLI JUNG THAPA Cause For Recognition By A Correspondent 1 week, 2 days ago