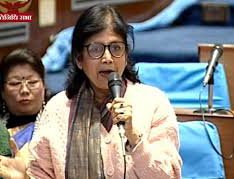 A group of miscreants attacked the residence of Janata Samajwadi Party lawmaker Sarita Giri over her lodging an amendment on the recent Constitution amendment bill introduced by the government, stating that the territories of Lipulekh, Limpiyadhura and Kalapani should be removed from the map as evidences are yet to be established.

Videos have surfaced on the internet in which people with black flags chanting slogan against Giri can be seen kicking the gates of Giri’s residence reports The Hiamalayan Times.

Giri has been claiming that there are not adequate evidences that support Nepal’s claim over Limpiyadhura, Kalapani and Lipu Lekh. She went on with the registration of the amendment while her party pledged support to the government proposed bill.

Nepal Airlines To Transport All Vaccines Within This Week From China By Agencies 3 days, 12 hours ago

India Hands Over 150 ICU Beds To Nepal As Part Of COVID-19 Cooperation By NEW SPOTLIGHT ONLINE 6 days, 13 hours ago