Anti-racism Protests On 3rd Weekend In US

Anti-racism Protests On 3rd Weekend In US 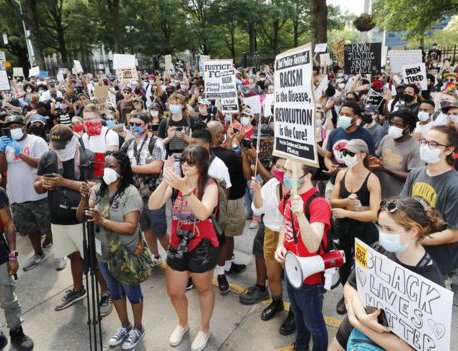 Demonstrators have taken to the streets across the United States for the third weekend after a black man died in police custody.

The protests against police brutality and racism took place in New York, Washington, Seattle, and elsewhere in the country on Saturday.

George Floyd died last month after a white police officer kneeled on his neck for more than eight minutes.

People called for rallies in more than 10 locations in central New York. About 500 protesters, mostly young people, gathered in Central Park and marched through the city to the chants of "Black Lives Matter" and "no justice, no peace."

The anti-racism protests have led to the removal of statues and monuments to Confederate officers who fought to preserve slavery in the 19th century Civil War.

The southern state of Kentucky took down the statue of a Confederate president from the state capitol building on Saturday.

Protests have taken place in fewer cities as nearly 20 days have passed since Floyd's death and the number of participants in the rallies has been declining. But demonstrators continue calling for police reforms and elimination of racial discrimination.

US To Donate Covid Vaccines Overseas: Biden By Agencies 6 hours, 5 minutes ago

Biden Aims To Vaccinate 70% Of US Adults By July 4 By Agencies 1 week, 6 days ago