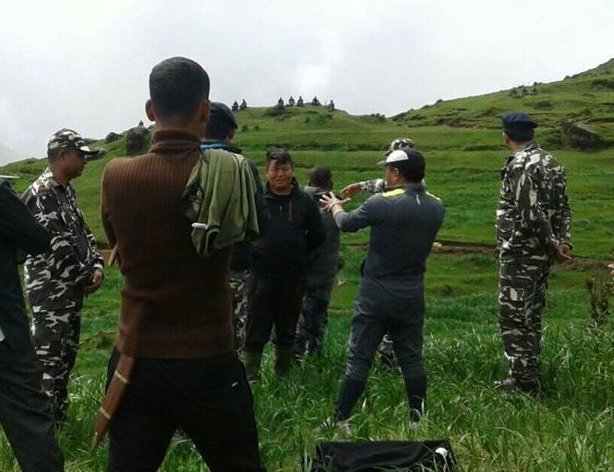 Local in Ilam district of eastern Nepal has started a construction of Park near the border despite obstruction from Indian border security force Sashastra Seema Bal (SSB) reports The Rising Nepal.

The government daily reports that Indian border security, Sashastra Seema Bal (SSB), has been obstructing the work since it was started two months ago although the park construction site is 500 meters into Nepal from the no man's land at the border between Nepal and India.

Following the obstacles from the Indian SSB, Maijogmai Rural Municipality had requested the district administration, armed police force in Ilam, Seema Surakshya Bal Pashupatinagar and border administration to take step for resuming the construction work, but to no avail.

Rai, who reached the construction site along with 20 other locals including members of the user's group, said the work was resumed after holding discussion with the Indian SSB.

A team of the Indian SSB from Manebhanjyang in India had reached Tumling for discussion when the locals said that the park construction site was Nepali territory and that they would not tolerate if the SSB continued with obstruction.

The Indian SSB has been demanding a letter from Nepali authority to build the park there whereas the locals said they would resist if the SSB obstructed the construction of the park again.

According to the daily, the Indian SSB has set up security posts encroaching no man's land and has been creating obstacles at many development works in the area saying the border was not clear in as long area as 52 kilometers in the district.