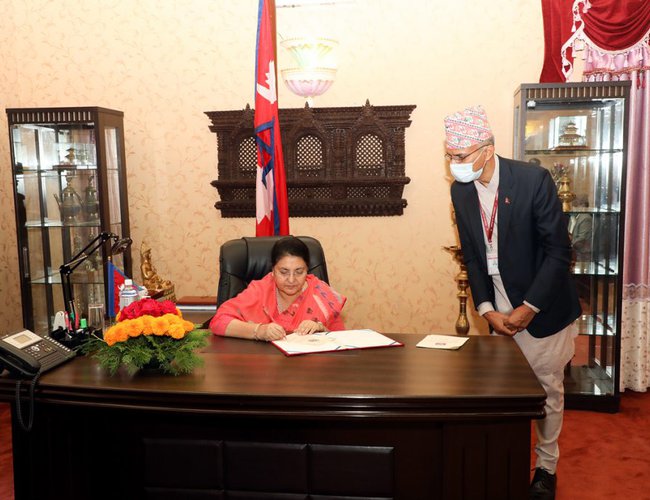 As India-China border disputes at the alarming level and both the countries are deescalating tension at their borders, President of Nepal Bidhya Devi Bhandari has authenticated the Constitution of Nepal second amendment Bill 2077. The bill, which passed by the House of Representatives and the National Assembly and authenticated by president, will pave to change Nepal’s Coat of Arms to include new map incorporating the territories of Limpiyadhura, Lipulekh and Kalapani as the territory is controlled by India.

As Nepal, which is currently involved in its own border row with India in the Kalapani region, has not issued any statement. According to a report in the Kathmandu Posts reports quoting that Nepali officials have been closely watching developments in the border standoff between India and China.

Foreign Minister Pradeep Gyawali told the Post that Nepal was watching the developments closely, adding “The events should not have a spillover effect on the region.”

Although India and China continue their negotiations at various level to deescalate the tensions following the violent clashes, it is yet to see what implications it will have in Nepal-India border dispute.

Mrigendra Bahadur Karki, executive director of the Center for Nepal and Asian Studies, a think-tank at Tribhuvan University told the newspaper that in the wake of the conflict, India is likely to be softer with Nepal in the border dispute between the two countries.

Nepal-India border disputes appeared, following the inauguration of 80-kilometre Lipulekh road. Nepal alleges that the road passes over its territory and India built it without permission.

The road is said to be shortest route between New Delhi and Kailash-Mansarovar, a revered Hindu pilgrimage site in Tibet.