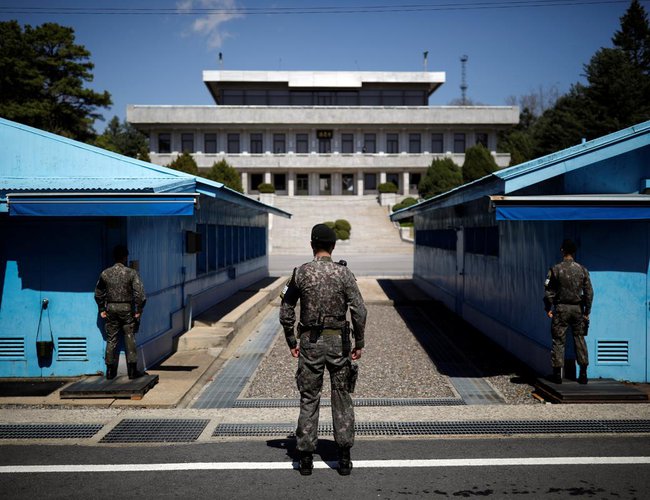 South Korea’ Defense Minister Jeong Kyeong-doo vowed strong responses to any aggression from North Korea, blaming the North for disappointing the expectations of those wishing for peace on the peninsula.

“We will forcefully respond to any attack from North Korea, without hesitation. We will keep under control the escalating tensions between the two Koreas,” Jeong said Thursday at an event to thank Korean War veterans.

The defense chief’s comment came just hours after the military said it had yet to detect signs of imminent North Korean military provocations amid tensions over Pyongyang’s threats to retaliate against Seoul over anti-North propaganda leaflets sent by defector groups. Seoul’s Joint Chiefs of Staff said it was closely monitoring the possibility of the North putting its threats into action.More

“No activity pointing to the North’s imminent action has been detected,” Kim Joon-rak, head of public affairs there, told reporters.

Authorities are going over every way in which Pyongyang could stage a provocation, but won’t share their observations in detail, he said.

“Addressing the North’s moves every time they come out would seriously compromise our security protocols.”

Speculation of an imminent missile test by Pyongyang surfaced on reports that the North’s leader Kim Jong-un may have flown to the eastern coast to observe a launch.

An aircraft Kim uses was spotted flying northeastward at around 10 a.m. Wednesday, and its signals disappeared near North Hamgyong Province, aviation tracker Aircraft Spot said Wednesday. Given the flight direction, some say its destination might have been the east coastal city of Sinpo, where Pyongyang is believed to have been building a new nuclear-tipped submarine.

The JCS neither confirmed nor denied leader Kim being aboard, saying it was standing on alert for any impending aggression from the North, whose military a day ago warned of deploying troops to the Demilitarized Zone as well as to the joint factory complex and Kumgangsan resort facilities, all of which are near the border.

Local experts downplayed speculation over a submarine-launched ballistic missile from the North.

“Top priority for Pyongyang is to stage provocations, along the inter-Korean border or near the disputed maritime border in the West Sea, to continue pounding Seoul. An SLBM more aggravates Washington, which is totally uninvited at the moment,” said Choi Kang, vice president of the Asan Institute for Policy Studies in Seoul.

Other specialists were generally on the same page.

“We know so little about Pyongyang’s SLBM to be betting on an incoming launch,” said Cheong Seong-chang, director of the Center for North Korean Studies at the Sejong Institute.

The North would likely go for a test run sometime this year, though, according to Cheong.

Some analysts altogether dismissed the idea Kim was even on the aircraft, for two reasons.

“Would Kim really let us track where he was off to? The flight model, which the reports cite as AN-148, also doesn’t match that of Kim’s plane, which should read IL-62M,” said Shin Jong-woo, a senior analyst at the Korea Defense and Security Forum.

Senior officials might have been aboard to prepare for unveiling a nuclear-tipped submarine in Sinpo that houses military equipment involving ballistic missiles. Test-firing an SLBM would be a later move, logically, but Pyongyang could catch us all off guard, Shin added.

US Carries out Airstrikes In Syria By Agencies 1 day, 14 hours ago

A Massive Funeral Held For Woman Shot During Myanmar Protest By Agencies 5 days, 15 hours ago

Australian PM Is Vaccinated As Rollout Begins By Agencies 6 days, 14 hours ago