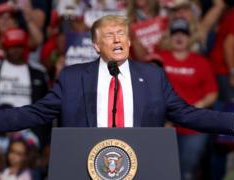 US President Donald Trump has begun addressing supporters at his first campaign rally since March, when the US coronavirus lockdown began.

Earlier, organisers cancelled an "overflow" event at Tulsa's 19,000-seat Bank of Oklahoma Center when the expected crowds failed to materialize.

There are concerns the event could increase the spread of Covid-19.

Those attending must sign a waiver protecting the Trump campaign from responsibility for any illness.

Hours before the rally, the campaign said six staff members involved in organising it had tested positive.

The Trump campaign said attendees would have to pass temperature checks before being allowed into the venue - and that they would be offered face masks.

More than 2.2 million cases of Covid-19 and 119,000 associated deaths have been reported in the US, according to data from Johns Hopkins University.

Mr Trump's re-election campaign rally is one of the biggest indoor gatherings in the US since the country's Covid-19 outbreak began.

The Trump campaign said it had received more than a million ticket requests, and that the president would speak inside the BOK Center and at an outdoor stage set up nearby for overflow crowds. When the numbers failed to appear, campaign officials cancelled the outdoor appearance, blaming "radical protesters" and the media for attempting to "frighten off" supporters.

In his opening remarks, Mr Trump said there had been "very bad people outside, they were doing bad things", but did not elaborate.

Supporters began queuing earlier this week for a chance to get into the arena, and 100,000 people or more were expected to gather in central Tulsa.

This week the number of new cases of Covid-19 in Oklahoma has been rising and local health officials fear the rally could become a "super spreader" event.

In a Facebook post, Tulsa Mayor GT Bynum acknowledged that Tulsa's residents were divided over it being the first city to host such an event.

"We do this as our positive Covid-19 cases are rising, but while our hospital capacity remains strong. Some think it is great, some think it is reckless. Regardless of where each of us falls on that spectrum, we will go through it as a community," he wrote.

Biden Unveils 'Once In A Generation' Spending Plan By Agencies 1 week, 3 days ago