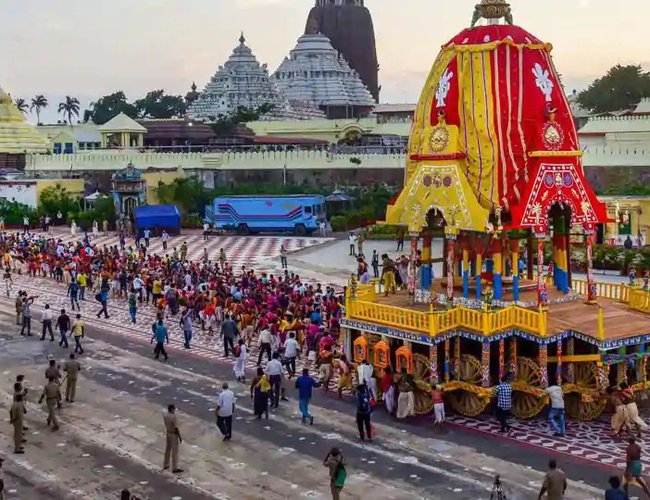 The Odisha government has imposed a 41-hour curfew in the temple town and started Covid-19 tests of 700 temple priests who would pull the three chariots in Jagannath Puri Rath Yatra.

The Jagannath Puri Rath Yatra, one of India’s biggest religious festivals, is underway on Tuesday in the temple town in Odisha amid the coronavirus pandemic.

A three-judge bench, headed by Chief Justice of India SA Bobde, said in its order that each chariot would be pulled by not more than 500 people, including officials and police, and there has to be an interval of one hour between pulling of the chariots.

The Odisha government has imposed a 41-hour curfew in the temple town and started Covid-19 tests of 700 temple priests who would pull the three chariots.

Here is all about the Rath Yatra festival in Puri:

* Lord Jagannath, Lord Balabhadra, and Goddess Subhadra are usually worshipped in the sanctum of the famous Jagannath Temple in Puri. They are brought out of the temple every year on the second day of the third Hindu month of Asadha onto the Bada Danda street of Puri in three huge chariots accompanied by Sudarshana Chakra.

* The nine-day Rath Yatra, or the chariot procession, celebrates this annual journey of Lord Jagannath and his two siblings from the 12th-century Jagannath Temple to Gundicha Temple, 2.5km away. The Gundicha Temple is their aunt’s home.

* The rituals for Rath Yatra will begin at 3am inside the 12th-century shrine.

* The Pahandi ritual (procession) will begin at 7am and the deities will board the chariots at the Singha Dwara facing towards the Gundicha Temple by 10am. The Chherapahara ritual will be held at 11.30am. The chariots will be pulled thereafter at around 12pm.

* The three deities are taken in the massive wooden chariots weighing 85 tonnes each. After staying in Gundicha temple for nine days, the three deities come back to the Jagannath Temple on the 10th day in a return journey.

* Lord Jagannath’s chariot Nandighosa is 45.6 feet in height and has 18 wheels. The 45- feet chariot of Lord Balaram comes with 16 wheels and is known as Taladhvaja and Devadalana is Goddess Subhadra’s 44.6 feet chariot with 14 wheels.

* The chariots are built every year only from a particular type of tree.

* Thousands of devotees pull the chariots to their aunt’s temple, the Gundicha Temple. It is considered to be a good omen and is also believed to bring luck and success if one gets a chance to pull the chariots.

* The deities stay at the Gundicha Temple for nine days, after which they ride the chariots back to their Jagannath Temple, a journey known as Bahuda Jatra.

* In the 425 years of the Rath Yatra, the event has been stopped 32 times, mostly during invasions.

* It was not held for the first time in 1568 when Kala Pahad alias Kala Chand Roy, a general of Bengal king Suleiman Kirrani, attacked the temple and pillaged the deities.

* The last time it could not be held was between 1733 and 1735 when Mohammed Taqi Khan, deputy governor of Odisha, attacked the Jagannath temple, forcing the shifting of the idols to Ganjam district.