In the wake of 2 months of lockdown to fight COVID-19, the budget presented by Finance Minister Dr. Yubaraj Khatiwada offers a galore of relief packages 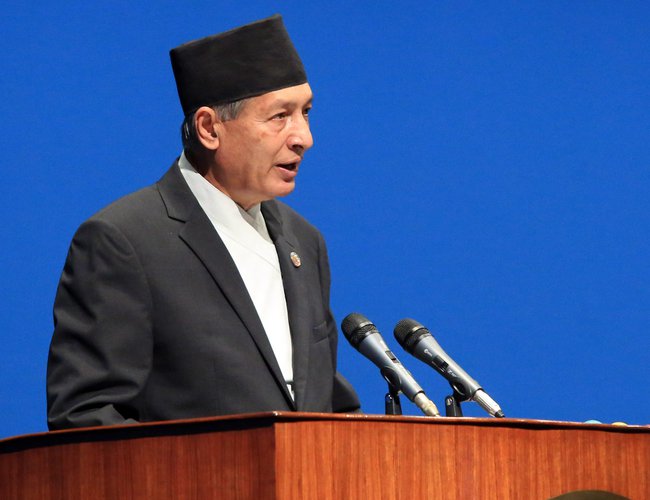 As Nepal’s economic sector has been badly hurt by two months of lockdown imposed to fight COVID-19, Finance Minister Dr. Yubaraj Khatiwada announced his annual budget of Rs. 1474 billion for FY 2020/21, with annual GDP forecast at around 2 percent.

Although Nepal’s revenue collection and flow of remittance have heavily suffered, with huge deficits and foreign grants and loan likely to see reduction this year, due to global economic crisis, Finance Minister Dr. Khatiwada has announced a big size of budget, reducing just small fractions compared to last year.

“Given the shrinking of revenue and resource due to global pandemic, the finance minister would have presented a reasonable and practical budget. This is a big budget, everything is based on expectation and assumption,” said former finance minister and Nepali Congress leader Gyanendra Bahadur Karki. “If the government fails to generate revenues and other resources, it will have to cut the size. I am sure that the budget’s size will be reduced almost 30 percent at the end of fiscal year looking at the present scenario. The document would neither encourage the workers nor the students and poor.”

Of the total budget, Rs. 948 billion has been allocated for recurrent expenditure while Rs. 352 billion will be used for capital expenditure.

Industrialist and Nepali Congress lawmaker Binod Chaudhary said that the size of budget was fine but the relief package for industries was inadequate.

The government has estimated to mobilize revenue of Rs. 889 billion and get Rs. 60 billion as foreign grants and seek Rs. 298 billion external loan and take Rs. 225 billion internal loan to meet the annual expenditure.

The annual budget has a deficit of Rs. 524 billion while the estimated revenue mobilization is less than the recurrent expenditure by Rs. 59 billion.

“The budget was still unable to bring solid programs with resource allocation to revive the economy from COVID-19,” said economist Dr. Dilli Raj Khanal. He said that the positive parts of the budget are the allocation of huge money in health sector and infrastructure development at the local level.

Khanal said that focus of the budget to deduct the unnecessary expenditure of the government, merge the management of same type of government enterprises were also positive.

The government has allocated huge amount of budget of above Rs 90 billion in the health sector which is positive to save lives, but it failed to introduce relief package to accelerate the economic activities and revive the COVID-19 affected economy.

Likewise, former Prime Minister Dr Baburam Bhattrai was happy for exclusive focus of government on health. However, he was disappointed over absence of targeted programs to meet the current crisis. Last year Rs 68 billion was allocated in health sector which has increased to Rs 90 billion this time.

However, former Finance Minister Surendra Pandey views that the budget estimation was sound in general. “Actual budget has been unveiled, however, constraints of execution are still there,” he said. Getting 7 per cent growth is ambitious, he said, adding that taking foreign debt is not as easy as mentioned in the budget.

“COVID-19 pandemic has badly affected global economy, the government has committed to expanding internal loans on capital expenditure which is good,” he said. Pandey also said borrowing internally would lead to liquidity crunch and that would pressurize the economy.

Since Nepal has limited resources and many constraints, preparing the budget is always a very difficult task. With the COVID-19 global pandemic and global economic crisis, finance Minister Dr. Khatiwada’s challenges are enormous.

However, he missed a chance to reduce the size of budget focusing on the revival of economic activities. There are so many relief packages and stimulus to activate the economy. How will it be implemented remains to be seen?

ADB PROJECTION: Nepal To Grow By 3.1% By A Correspondent 8 hours, 9 minutes ago

Dordikhola To Generate 27 MW Electricity From Mid-July By Agencies 6 days, 18 hours ago