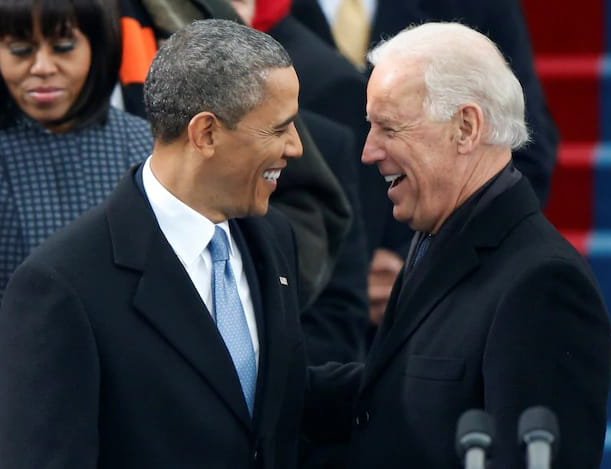 They spent eight years together — joking in the Oval Office, bonding over mini-golf and building a friendship with their two families. And on Tuesday evening, they have reunited again on the campaign trail for a virtual fundraiser.

Beaming in from different locations — dressed in matching button-downs and tieless suit blazers and framed by white bookcases — Barack Obama and Joe Biden made the case for why the latter was the best person to continue the former’s legacy. The former president said his vice-president was an experienced pair of hands who knew the economic hardship and tragedy that many in the country were experiencing.

“I am here to say that help is on the way because there is nobody that I trust more to heal this country and be able to get it back than my dear friend Joe Biden,” Mr. Obama declared, later adding: “People around the world know Joe Biden, trust him, believe him.”

The virtual fundraiser — Mr. Obama’s first with Mr. Biden — generated $11m, dwarfing the amount raised by any other virtual fundraiser for the Democratic presidential nominee. Jen O’Malley Dillon, Mr. Biden’s campaign manager, called the event “certainly the biggest fundraiser I’ve been a part of”, with more than 175,000 grassroots donors in attendance.

The former vice-president has staked his campaign partly on his legacy as Mr. Obama’s second-in-command.

“The way Biden is packaging himself is not Senator Biden — it’s former Vice-President Biden and connecting himself to the Obama legacy,” said Julian Zelizer, a historian at Princeton University. He noted that this strategy had helped Mr. Biden win over African-American voters in South Carolina — a key demographic of the Obama coalition.

It’s incredibly important to have President Obama’s voice. Not only is [he] proud of Joe but he also thinks Joe is the right person to be the next president

Tom Nides, who served as deputy secretary of state in the Obama administration and knows both men, said Mr. Obama could help Mr. Biden among other key groups, including young voters who turned out in larger numbers for Mr. Obama in 2012 than they did for Hillary Clinton in 2016.

“The world is filled with presidents and vice-presidents not getting along or having difficult relationships. That wasn’t the case between these two,” he said.

Mr. Obama credited Mr. Biden with his work on the country’s 2009 stimulus package in the midst of the Great Recession and the Affordable Care Act.

“I’ll be honest — and hopefully Joe doesn’t take offense by this. But Joe’s been around for a while, and sometimes what happens is we take that for granted, and you know there is a sense we always look for the new and shiny object,” he said.

Four years after leaving office, Mr. Obama remains one of the most popular figures in the Democratic party and enjoys strong favorable ratings among independent voters. On the right, however, he has remained a target for Donald Trump and the Republican party.

Mr. Trump accused his predecessor of “treason” this week, telling Christian network CBN News that the former administration had been “spying on his campaign”. He has provided no evidence to back up the allegations.

Mr. Trump’s re-election campaign has seized on Mr. Obama’s post-primary endorsement of Mr. Biden and reports that he discouraged the former vice-president from running in 2016 as evidence of the former president’s wavering support.

Biden Unveils 'Once In A Generation' Spending Plan By Agencies 2 weeks, 1 day ago