Fauci Warns Of US Coronavirus Surge

Fauci Warns Of US Coronavirus Surge 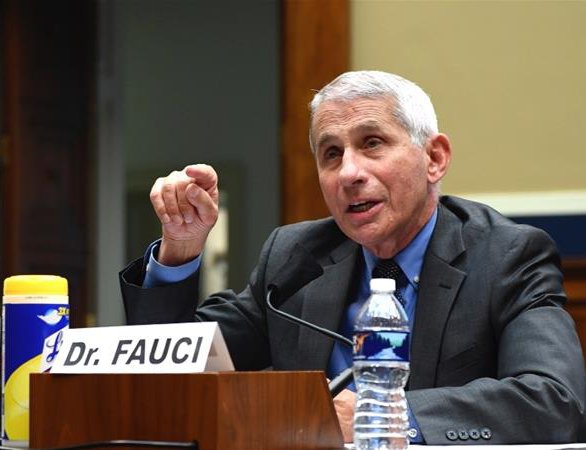 Dr Anthony Fauci said coming weeks 'critical' to address rising number of cases across half of US states.

Dr Fauci has told a House committee there could be a COVID-19 vaccine later this year or early in 2021, but warned that the next few weeks will be critical to tamping down coronavirus hot spots around the country.

Fauci and other top health officials also said they have not been asked to slow down testing for coronavirus, a controversial issue after President Donald Trump said last weekend he had asked them to do just that because it was uncovering too many infections. Trump said earlier in the day that he was not kidding.

"We will be doing more testing," Fauci, the government's top infectious disease expert, told a House committee on Tuesday.

Fauci is testifying before a House committee - along with the heads of the Centers for Disease Control and Prevention, the Food and Drug Administration, and a top official at the Department of Health and Human Services.

"We've been hit badly," Fauci said. He said he was "really quite concerned" about rising community spread in some states, including Arizona, which Trump was visiting on Tuesday to view the construction of a border wall and for a rally at a megachurch.

"The next couple of weeks are going to be critical in our ability to address those surges," Fauci said.

Since Fauci's last appearance at a high-profile hearing more than a month ago, the United States is emerging from weeks of stay-at-home orders and business shutdowns.

Reopening businesses and loosening restrictions have been done in an uneven way, with some states far less cautious than others. A trio of states with Republican governors who are bullish on reopening - Arizona, Florida and Texas - are among those seeing worrisome increases in cases.

Twenty-five US states reported more new cases last week than the previous week, including 10 states that saw weekly new infections rise more than 50 percent, and 12 states that posted new records, according to the analysis of data from The COVID Tracking Project, a volunteer-run effort to track the outbreak.

Texas reported one of the largest rises in new cases at 24,000 for the week ended June 21, an increase of 84 percent from the previous week. The number of COVID-19 tests that came back positive in the state rose from 7 to 10 percent.

Arizona reported 17,000 new cases, a 90 percent increase, with 20 percent of tests coming back positive, according to the analysis

Biden Unveils 'Once In A Generation' Spending Plan By Agencies 1 week, 2 days ago