How Coronavirus Is Poisoning US-China Relations, One Accusation At A Time

The pandemic has rekindled conspiracy theories, renewed criticism and hostility and increased calls for a hard decoupling – while leaving a leadership void for China to fill and inflicting greater economic damage on the US 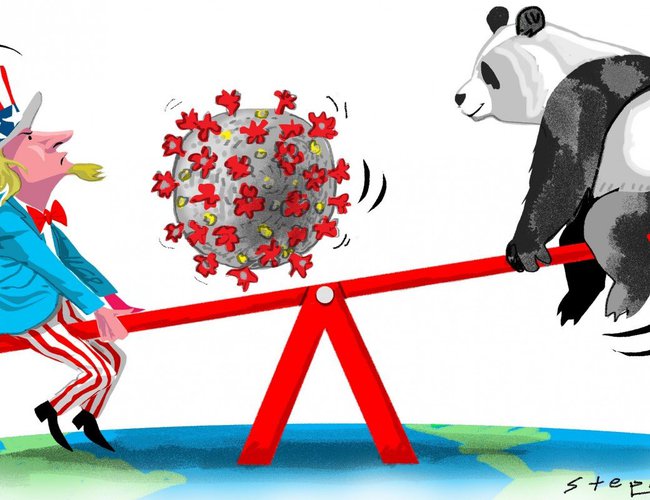 Historically, pandemics affected international relations in many ways. By causing a massive loss of human life, a pandemic could undermine a country’s fiscal revenue base. The Plague of Justinian in the sixth century, the first recorded pandemic, reduced the population of Byzantine Empire by 40-50 per cent, shattering its dream of re-establishing the old Roman empire.

A pandemic could also weaken a nation’s military power. Intensified exposure to bubonic plague in the 14th century, for example, was a real factor in the decay of the Mongols’ power.

A pandemic might even change the course of war. During World War I, the Spanish influenza was believed to have debilitated the war effort of the Central Powers more than that of the Allies, perceptibly impeding the German offensive of the spring of 1918, which, if successful, would have resulted in victory for the Central Powers.

That said, the global spread of an acute infectious disease often creates urgency for international cooperation. During the 2009 H1N1 pandemic, health authorities in both the United States and China exchanged technology and information in monitoring the spread of the flu and accelerating the development of a vaccine. The US provided China with virus samples and diagnostic kits, helping China become the first country to mass produce an H1N1 vaccine. Chinese scientists, in turn, shared their method with the world, facilitating vaccine development efforts by pharmaceutical companies and American health agencies.

A teacher receives an H1N1 vaccine injection at a school in Luoyang, Henan province, in November 2009. China, which received virus samples and diagnostic kits from the US, was the first country to mass produce an H1N1 vaccine. Photo: Reuters

A teacher receives an H1N1 vaccine injection at a school in Luoyang, Henan province, in November 2009. China, which received virus samples and diagnostic kits from the US, was the first country to mass produce an H1N1 vaccine. Photo: Reuters

In contrast, the Covid-19 pandemic only sets the two countries further apart. With all the buck-passing and finger-pointing, the US-China relationship has reached its lowest point since 1989. The pandemic has accelerated the downward spiral through a confluence of events and developments, all transpiring in the past six months.

First, it rekindled conspiracy theories on both sides. Fear and uncertainty associated with the novel coronavirus, about which there is still much unknown, provided fertile ground for rumours and myths about the origin of the outbreak. Some suggested the virus was a biological weapon, while others claimed it was leaked from a biological lab.

Encouraged by disinformation campaigns from governments on both sides, the spread of conspiracy theories further undermined trust and cooperation between the two nations. It came as no surprise that China initially refused to allow US Centres for Disease Control and Prevention experts to visit Wuhan after the US scuttled its partnership with Beijing over public health.

Second, the pandemic and China’s response, when intertwined with US domestic politics, has become a lightning rod for China bashers. US news media outlets’ criticism of the country’s handling of the outbreak drew the wrath of the Chinese government, leading to the expulsion of American journalists from China. China’s move, in turn, reinforced the bipartisan consensus in the US that China is a hostile threat.

Later, fearing that his prospect of re-election is being hurt by his ineffectiveness in addressing the Covid-19 outbreak as well as the anti-racism protests, President Donald Trump deflected domestic attention by suggesting the virus originated from a Chinese lab and accused the World Health Organisation (WHO) of being a puppet of Beijing.

Third, the pandemic accelerates the mood shift among policy elites on both sides, who increasingly favour “decoupling” from each other. In the US, the perception of China as the origin of the pandemic and concern about the disruption of the global supply chain have led politicians and pundits to use the outbreak to demand a “hard decoupling” from China.

In China, disillusion over the US failure to effectively handle the outbreak and its “bullying” attitude towards Beijing have convinced even liberal-minded elites that China should move to reduce the risks associated with interdependence. The shifting momentum solidifies negative public opinion towards each other.

State and official media outlets in China are saturated with comments and posts that portray the US as a diminishing and hostile power. In the US, a recent Pew survey suggests that roughly two-thirds of respondents have an unfavourable view of China, up nearly 20 percentage points since 2017.

Fourth, the lack of international cooperation in fighting the pandemic has lowered the bar for global leadership. The WHO’s failure to exercise effective leadership in coordinating international response and the US refusal to take the initiative to help other countries have created tremendous opportunities for China to fill the void. But as China became more assertive in claiming leadership through the so-called mask diplomacy, the US feels even more threatened by Beijing’s global ambitions. The new China strategy released on May 20 supports a competitive approach to China that is based on “a tolerance of greater bilateral friction”.

Finally, the pandemic can affect the balance of power between the two. True, it has taken a heavy toll on the economy and society in both countries. The shock, though, may not be the same. According to a recent World Bank estimate, the US economy will contract by 6.1 per cent this year while China’s growth slows to 1 per cent. Given the size of their economies last year (US$21.43 trillion for the US and US$14.14 trillion for China), the gap in gross domestic product between the two may continue to shrink in China’s favour. The power shift will therefore sustain the fear of China using the pandemic to displace the US in this power game.

In a nutshell, the Covid-19 pandemic is shaping China’s relationship with the US in ways not desirable to both sides. To paraphrase Joseph Nye, rather than seeing the use of “power with others,” i.e. cooperating with each other to address common challenges, we are witnessing the use of “power over others” – competition, confrontation and containment – in US-China relations.

Embroiled in the US presidential electoral politics, bilateral relations are likely to be on an even more dangerous roller coaster ride in the coming five months. So, fasten your seat belts and get ready for a free fall.

Yanzhong Huang is a senior fellow for global health at the Council on Foreign Relations, and a professor at the School of Diplomacy and International Relations, Seton Hall University

Change Of Power In Afghanistan Not Inclusive: Indian PM Modi At SCO Summit By Agencies 21 hours, 18 minutes ago

Crisis Looms In Afghanistan One Month After Taliban Takeover By Agencies 3 days, 20 hours ago