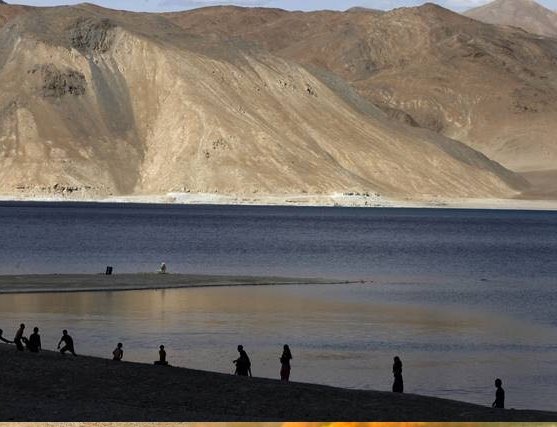 Amid reports of satellite images showing Chinese structures back at the site of the June 15 clash in Galwan Valley and massing of PLA troops in the Depsang plains, Anurag Srivastava, spokesperson for the Ministry of External Affairs, said “both sides remain deployed in large numbers in the region” of the Galwan Valley “while military and diplomatic contacts are continuing”.

In a strongly-worded statement, the MEA said “at the heart of the matter is that since early May, the Chinese side has been amassing a large contingent of troops and armaments along the LAC”.

A day after Indian and Chinese diplomats agreed to “sincerely implement the understanding on disengagement and de-escalation” along the Line of Actual Control, New Delhi drew the red line Thursday, saying “continuation of the current situation would only vitiate the atmosphere for the development of the relationship” between the two countries.

Underlining that this is “not in accordance” with the pacts since 1993, he said: “Obviously, the Indian side had to undertake counter deployments and the resulting tension has thereafter expressed itself.”

On June 20, the Prime Minister’s Office had said “Chinese forces have come in much larger strength to the LAC and that the Indian response is commensurate”.

The MEA also hit out at obstruction of Indian patrolling by Chinese troops in “complete disregard” to all mutually agreed norms.

“The deployment of a large body of troops and changes in behaviour has also been aggravated by unjustified and untenable claims. The recent shift in the Chinese position on the Galwan Valley is one example,” Srivastava said, referring to Beijing’s claim to Galwan Valley.

Describing the Wednesday meeting between diplomats under the Working Mechanism for Consultation & Coordination on India-China Border Affairs (WMCC) as a “significant development” and referring to the agreements and understanding reached between the Foreign Ministers on June 17 and Army Commanders on June 6 and 22, he said, “We expect the Chinese side to sincerely follow up on this understanding and ensure the expeditious restoration of peace and tranquility in the border areas.”

Responding to queries, Srivastava, reading from a statement, said: “In early May, the Chinese side had taken action to hinder India’s normal, traditional patrolling pattern in the Galwan Valley area. The resulting face-off was addressed by the ground commanders as per the provisions of the bilateral agreements and protocols. In mid-May, the Chinese side sought to change the status quo in other areas of the Western Sector.”

Over 10 Reportedly Killed In Myanmar Protests By NEW SPOTLIGHT ONLINE 2 days, 7 hours ago

Elections Is Just A Month Away: Alliance Is Making Is Making By Agencies 5 days, 6 hours ago

US Carries out Airstrikes In Syria By Agencies 5 days, 6 hours ago