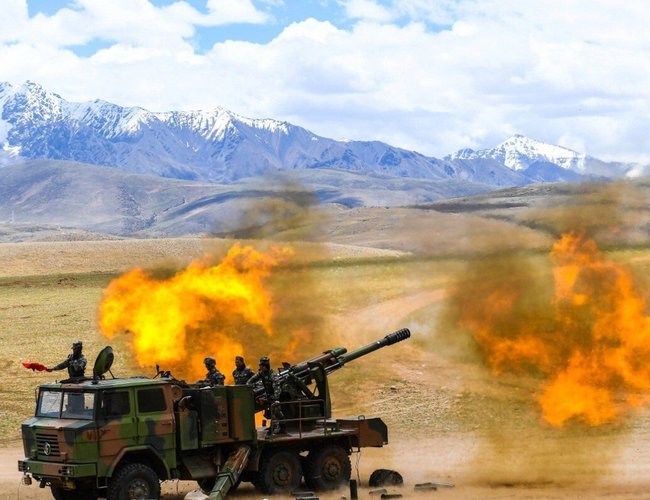 By Liu Zhen in Beijing

The Chinese army carried out a live-fire drill in Tibet as tensions with India escalated following a deadly clash on the disputed Himalayan border, Chinese state media revealed.

The drill simulated removing the enemy’s fortified positions using a joint operation with a brigade – around 7,000 soldiers – of the People’s Liberation Army (PLA) Tibet military region on a 4,700m-high plateau.

The exercise involved artillery, missiles, aviation, electronic warfare, engineering and special forces. Tanks and drones were also used in live-fire combat, according to the PLA.

The Chinese report, published late on Tuesday, said the drill was held in “recent days” without being specific about the date.

The Tibet military region said via its social media account on Tuesday that the brigade was the only heavy mechanised mixed brigade in the region, which underwent a restructuring during the 2017 Doklam standoff with India.

The announcement came after a lethal fight in the Galwan Valley on Monday between Indian-controlled Ladakh and Chinese controlled Aksai Chin.

In the worst skirmish in decades, India said 20 of its soldiers were killed in the clash. Although Indian media reported that Chinese soldiers had been killed, China officials did not confirm any casualties.

The Aksai Chin region is guarded by the Xinjiang military region which, like their Tibetan counterpart, is part of the PLA’s Western Theatre Command.

The drill took place in the Nyenchen Tanglha Mountains in eastern Tibet, more than 1,000km away from the site of the deadly clash.

In the war game, the PLA began with reconnaissance and interspersed deployment of forces. It launched sudden artillery fire coverage from both land and air while moving personnel and drones to flanks to clear paths for tanks.

After taking down simulated enemy helicopters with air-defence fire and landing their own airborne special forces, the final rush cleared more than 1,000 targets over an area of tens of square kilometres.

Several of the most advanced weapons displayed at last year’s National Day parade – such as Type 15 lightweight tanks and HJ-10 anti-tank missiles as well as PLZ-07A 122mm self-propelled howitzers and PHL-11 122mm self-propelled rocket launchers – were being deployed and used at high attitude for the first time.

“In the drill our forces overcame the harsh environment, closely coordinated and integrated air and land forces in modules, applied the tactics of whole-area joint attack and three-dimensional penetration to seize control, combining the artillery bombardment with precision sniping, as well as drone reconnaissance and strike,” said the brigade commander, Zhang Jialin.

The Chinese military has stepped up deployment along the border region since tensions with India flared up in early May.

In early June, state television reported a fast deployment, in which a whole brigade was moved from the central province of Hubei to a “northwestern plateau” in a few hours.

As well as hundreds of armoured vehicles in desert camouflage and a large amount of equipment, thousands of paratroopers were sent by civilian transport including chartered passenger flights and high-speed rail to begin training on the plateau.

Sign up now for a 50% early bird discount on the 100+ page China Internet Report 2020 Pro Edition, which includes deep-dive analysis, trends, and case studies on the 10 most important internet sectors. Now in its 3rd year, this go-to source for understanding China tech also comes with exclusive access to 6 webinars with C-level executives. Offer valid until 30 June 2020.

Minister of Foreign Affairs refuted recent media reports on Nepal’s border with China saying there is no such incident of missing of boundary pillar as reported in media.

“It may be recalled that the boundary between Nepal and China was delineated and demarcated on the basis of the Boundary Treaty of 5 October 1961 and the subsequent protocols signed between the two countries. Boundary Markers No. 37 and 38 reported as missing in the media reports have never been erected as agreed between the two countries owing to natural conditions,” said Ministry in its press release.

“Attention of the Ministry has been drawn to the reports in the media regarding Nepal-China boundary and encroachment of Nepali territory. The news allegedly based on the "report" of the Ministry of Agriculture and Livestock Development which that Ministry has already refuted and clarified stating that such “report” doesn’t exist and that the subject matter doesn’t fall under its jurisdiction,” states Ministry.

“The Government of Nepal will solve through mutual consultation between the concerned authorities of the two countries in case any issue arises. The Ministry requests the media to verify the information from the relevant authorities before commenting on such sensitive matters which may adversely affect the relations between the two friendly neighbors. “

Liu Zhen joined the Post in 2015 as a reporter on the China desk. She previously worked with Reuters in Beijing.

England To Lift COVID Restrictions As Cases Rise By Agencies 5 days, 18 hours ago

APEC Agrees On Fair Vaccine Access By Agencies 1 week ago

Flood Killed More Than 120, Hundreds Missing In Western Europe By Agencies 1 week ago

US Warns China Over Maritime Threats By Agencies 1 week, 4 days ago