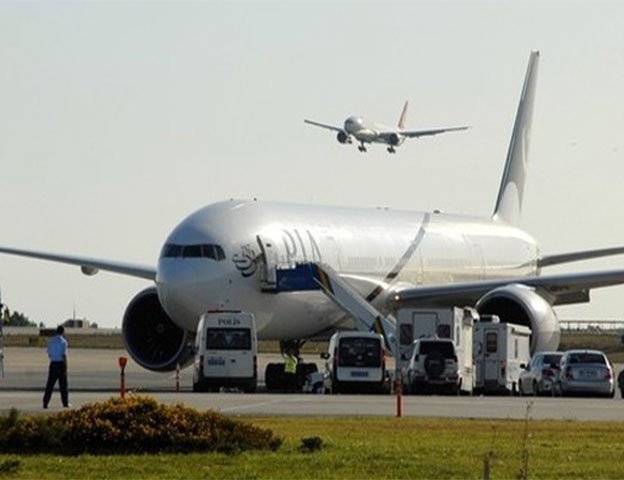 The management of Pakistan International Airlines (PIA) has decided to ground its 150 pilots.

Minister for Aviation Ghulam Sarwar Khan disclosed in the National Assembly on Wednesday that a large number of commercial pilots possessed ‘dubious licences’.

PIA spokesman Abdullah Hafeez told Dawn that “about 150 pilots are being grounded.”

He said the management has now written to the Civil Aviation Authority to urgently provide the list of other licences found to be dubious and all of them will be indefinitely grounded pending inquiries against them.

Pakistan International Airlines (PIA) on Friday said that the issue of commercial pilots possessing dubious licences — brought to light after an investigation into a recent plane crash that claimed the lives of 97 people — was not exclusive to the national carrier.

In a tweet, PIA said that the licences were issued by the competent authority and were "valid as per their records".

"It's the process and discrepancies through which they were obtained [...] triggered the inquiry by the government and action."

The issue of dubious licenses drew global attention after Aviation Minister Ghulam Sarwar Khan declared in the National Assembly that 150 pilots from PIA had fake licences.

There are 860 active pilots in the country, he had said, adding that of these, 262 pilots did not even take their exams themselves.

A day earlier, Chief Justice of Pakistan (CJP) Gulzar Ahmed summoned the director general of the Civil Aviation Authority (CAA) to explain allegations of fake licences by some pilots of different airlines of the country who fly passenger aircraft and thus put the lives of people at stake, a serious offence under the law.

The CAA director general is requi­red to furnish a comprehensive report before the Supreme Court within two weeks in this regard and when the case will be taken up again after three weeks, chief executive officers of the PIA, AirBlue and Serene will also appear before the court with reports about the professional qualification of pilots in their respective airlines.

The credibility of CAA and PIA also took a massive hit when the International Air Transport Association (IATA) expressed concern over the "serious lapse in licensing and safety oversight by the aviation regulator".

Amid the aviation crisis, the PIA management decided to ground 150 pilots and started relieving them from flight rosters for allegedly possessing ‘dubious licences’, while asking the CAA to urgently provide the list of all those who allegedly had fake/suspicious commercial pilot licences.

Sources said the PIA management had not officially received the list of those pilots having ‘dubious licences’ from the CAA, but had decided not to allow such pilots to operate flights and initiated departmental action against them.

PIA spokesman Abdullah Hafeez told Dawn that it had already been announced that about 150 pilots would be grounded.

Despite the number of such pilots and its adverse impact on PIA’s flight operations, all of them would be indefinitely grounded pending the outcome of inquiries against them, constituted by the government of Pakistan, he said.

PIA Chief Executive Officer Air Marshal Arshad Malik on Thursday wrote another letter to the director general of the CAA and a letter to the aviation division secretary asking them to urgently provide the list of all those PIA pilots having fake/suspicious licences.

Air Marshal Malik said the provision of lists of commercial pilots having fake or suspicious licences would enable the management to issue instructions for immediate action.

The Pakistani government plans to launch a criminal investigation into aviation officials suspected of being involved in cheating on qualification exams for an airline pilot's license.

Probes into a plane crash last month revealed that 262 pilots, or nearly one-third of the country's 860 pilots, did not have legitimate licenses and were unqualified to fly. The companies they worked for included Pakistan International Airlines, which operated the aircraft in the accident.