Did Beijing Market Coronavirus Cluster Begin In May? 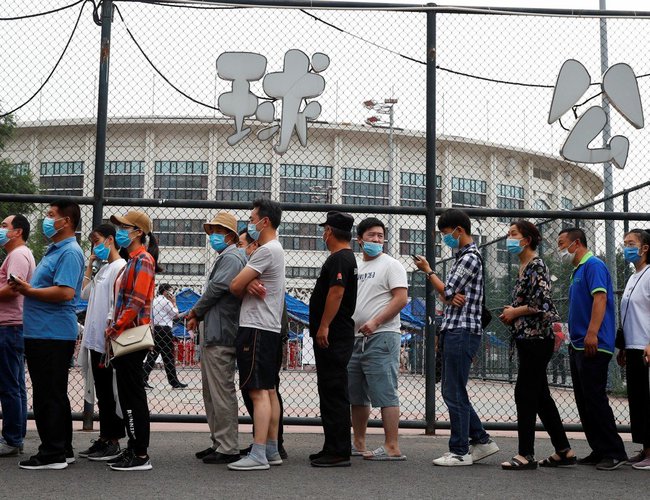 The coronavirus outbreak in a Beijing market may have started a month before the cluster became apparent, the chief of China’s disease control centre has said.

More than 1,200 flights coming in and out of Beijing were cancelled on Wednesday as infections related to the sprawling Xinfadi wholesale market continued their upwards trend, with 31 new patients reported and a further spread of cases to eastern China.

There are now 137 patients linked with the market, plus three suspected cases and a further six people who have tested positive for the disease but are yet to develop symptoms. The eastern province of Zhejiang also reported one confirmed case – a vendor from the market who was diagnosed after returning to his home in Wenling.

Online news portal Caixin reported on Wednesday that the Xinfadi cluster may have already begun in May, according to Gao Fu, director of the Chinese Centre for Disease Control and Prevention.

“It is possible that there were already a lot of asymptomatic or mild carriers during that month, and that’s why there is a high amount of the virus in the environment. This is our estimation and needs to be further verified,” Gao told a meeting with public health officials in Shanghai on Tuesday, according to Caixin.

“The Sars-CoV-2 [which causes Covid-19] can incubate in some dark, humid and polluted environment, which is not expected by anyone. It is then exposed to many after a certain period of incubation. I myself think that is what happened in Beijing,” he said.

Pang Xinghuo, deputy head of the Beijing’s Centre for Disease Control and Prevention, said case numbers might still increase even though the outbreak had been caught early.

“The epidemic is still in the rising phase with a high risk of spreading making it difficult to control,” she said, adding that the situation might continue for some time.

Beijing has conducted rigorous testing following the first case in the fresh outbreak was reported on Thursday.

Zhang Qiang, an official with the Beijing municipal committee of the Communist Party of China, said that more than 356,000 people who worked at food markets, had been to markets where there had been confirmed cases or lived in nearby estates had been tested since Sunday.

Healthcare workers, teachers and pupils who had returned to school, and frontline epidemic control workers would also be tested, he said, adding the capital had the capacity to collect up to 40,000 samples a day.

Beijing raised its emergency response to the second highest level late on Tuesday night – less than two weeks after it was lowered – and reimposed a partial lockdown on all residents. People from“key areas” – which are defined as estates, markets or neighbourhoods with confirmed Covid-19 patients – are banned from leaving Beijing.

Party mouthpiece People’s Daily reported on Twitter that 1,255 flights were cancelled at two Beijing airports, accounting for 70 per cent of scheduled trips, on Wednesday morning. Passengers who booked train tickets in and out of Beijing have been allowed to refund tickets without fees.

Other residents have been advised not to leave the city unless absolutely necessary and must first be able to show a negative nucleic test result within the past seven days, according to Chen Bei, deputy secretary general of the Beijing municipal government.

Neighbourhoods in high and medium-risk areas have been closed and all residents must stay home and take nucleic acid tests to determine if they have been infected. No visitors will be allowed into these areas. Schools, which had partially reopened, have been ordered to switch to online learning and all universities have been closed. Entertainment venues will also shut down.

The authorities stopped short of suspending production but are encouraging businesses to adopt staggered office hours and work-from-home practices to lower the risk of transmission.

One asymptomatic patient in neighbouring Hebei province began showing symptoms and has now been confirmed to have Covid-19. China has also reported 11 new imported cases from overseas, with 10 people in Gansu who returned from Saudi Arabia and one in Sichuan province.

Sign up now for a 50% early bird discount on the 100+ page China Internet Report 2020 Pro Edition, which includes deep-dive analysis, trends, and case studies on the 10 most important internet sectors. Now in its 3rd year, this go-to source for understanding China tech also comes with exclusive access to 6 webinars with C-level executives. Offer valid until 30 June 2020.

Based in Beijing, Zhuang Pinghui joined the Post in 2004 to report on China. She covers a range of issues including policy, healthcare, culture and society

Colin Powell Dies Of Covid At 84 By Agencies 1 day, 3 hours ago

At Least 32 Dead In Blast At Afghan Mosque By Agencies 4 days, 3 hours ago