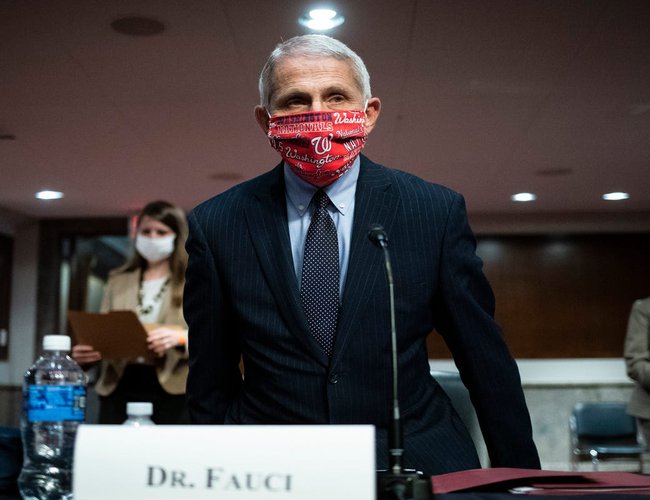 Top disease researcher Dr Anthony Fauci has told the US Senate that he "would not be surprised" if new virus cases in the country reach 100,000 per day.

"Clearly we are not in control right now," he testified, warning that not enough Americans are wearing masks or social distancing.

During the hearing, he said about half of all new cases come from four states.

Earlier, the New York governor said nearly half of all Americans must self-quarantine if they visit the state.

On Tuesday, cases rose by more than 40,000 in one day for the fourth time in the past five days.

The surge - which is occurring particularly strongly in southern and western states - has forced at least 16 states to pause or reverse their reopening plans, according to CNN. Florida, Arizona, Texas and California are the four states referenced by Dr Fauci as being most heavily hit currently.

For some the new measures come over a month after they first began to reopen their economies.

Also on Tuesday, New York Governor Andrew Cuomo expanded the number of Americans who are required to self-quarantine for 14 days if they visit the state. There are now 16 states on the list.

They join Alabama, Arkansas, Arizona, Florida, North Carolina, South Carolina, Texas and Utah. All together, the order affects 48% all US residents, according to a USA Today analysis.

What did Dr Fauci say?

Testifying to a Senate committee on the effort to reopen schools and businesses, the director of the National Institute of Allergy and Infectious Diseases criticised states for "skipping over" benchmarks required for reopening, and said cases will rise as a result.

"I can't make an accurate prediction, but it is going to be very disturbing, I will guarantee you that," he told Senator Elizabeth Warren.

"We can't just focus on those areas that are having the surge. It puts the entire country at risk," he added.

Dr Fauci also called on the US government to produce face masks to be distributed for free to all Americans, and condemned the "all or none phenomenon" of some people who have completely disregarded social distancing measures.

Robert Redfield, the director of the Centers for Disease Control and Prevention (CDC) - who was also testifying on Tuesday - told lawmakers that 12 states have seen hospital admission numbers rising, and Arizona has recorded an increasing death rate.

"It is critical that we all take the personal responsibility to slow the transmission of Covid-19 and embrace the universal use of face coverings," Dr Redfield said.

"The disease impacts us all and it's going to take all of working together to stop it."

Before the hearing began, Republican Senator Lamar Alexander, who leads the committee, appealed to President Donald Trump to wear a face mask - an act he has yet to do in a public event.

"Sadly this simple life-saving practice has become part of the political debate," said the ally of Mr Trump.

"The president has plenty of admirers that would follow his lead," he said. 'We have way too much virus'

On Monday, Dr Anne Schuchat, principal deputy director of the CDC, warned that the US is not responding like other countries who have shown success in containing the coronavirus, and has allowed the virus to spread much more widely and rapidly.

"We're not in the situation of New Zealand or Singapore or Korea where a new case is rapidly identified and all the contacts are traced and people are isolated who are sick and people who are exposed are quarantined and they can keep things under control," Dr Schuchat said in an interview with the Journal of the American Medical Association.

"We have way too much virus across the country for that right now, so it's very discouraging."

New Zealand declared the country infection-free on 8 June, and since then has had to contain several cases that came from international travellers. South Korea has aggressively employed contact tracers, and since 1 April has recorded fewer than 100 cases per day. Singapore's outbreak peaked in mid-April when 1,400 new cases were reported in one day.

The US has recorded 2,682,897 confirmed cases of coronavirus as of Tuesday, according to Johns Hopkins University, and has a total of 129,544 deaths.

"This is really the beginning," Dr Schuchat added.

"I think there was a lot of wishful thinking around the country that, 'hey it's summer'. Everything's going to be fine. We're over this and we are not even beginning to be over this. There are a lot of worrisome factors about the last week or so."

Dr Fauci warned on Monday that the US is "unlikely" to develop herd immunity to the coronavirus even once a vaccine is available, which he earlier predicted could happen by early 2021.

He said this was due to the combination of a vaccine that is potentially only partially effective, and the large number of Americans who might refuse to get it.

"There is a general anti-science, anti-authority, anti-vaccine feeling among some people in this country - an alarmingly large percentage of people, relatively speaking," he said, calling for more education to promote confidence in vaccines.

Dr Fauci added that he would gladly "settle" for a vaccine that is only 70% to 75% effective at first.

US To Donate 25 Million Doses Covid Vaccines Overseas Including South Asia By Agencies 1 week, 5 days ago

US To Donate Covid Vaccines Overseas: Biden By Agencies 4 weeks, 1 day ago