Locusts Reached To 26 Districts In Nepal, Destroyed The Crops

Locusts Reached To 26 Districts In Nepal, Destroyed The Crops 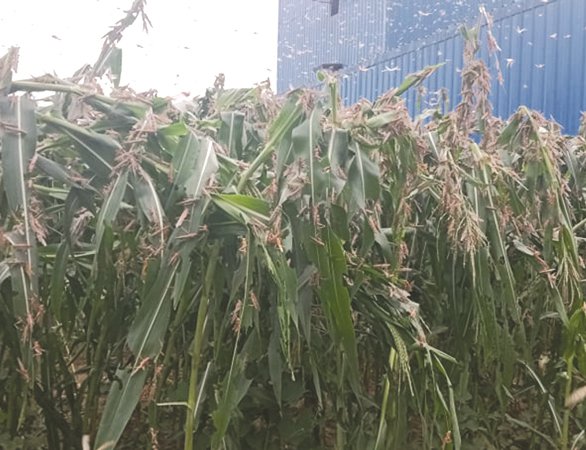 The first batch of locusts, which entered in Nepal, has destroyed the crops in various parts of the country. Almost 200000 locusts also entered in Kathmandu and some of them moved to Nuwakot.

According to the government officials, the locusts have damaged crops mostly maize and vegetables in mainly four districts Makwanpur, Dang, Pyuthan and Palpa -- by Wednesday reports The Rising Nepal.

“They have reached 26 districts across the country as of Wednesday,” said Ram Krishna Subedi, information officer of Plant Quarantine and Pest Management Centre under the Ministry of Agriculture and Livestock Development.

“The locust swarms that first entered Nepal last Saturday,” said Subedi, who is leading the Locust Information Centre established at Plant Quarantine and Pest Management Centre. According to him, the locusts damaged crops mainly in four districts -- Makwanpur, Dang, Pyuthan and Palpa -- by Wednesday.

The locusts damaged crops slightly in a few areas in Chitwan, Kapilvastu, Rupandehi and Kailali districts.

“No new swarm of locusts has entered Nepal except for the one that entered on Saturday morning. But there is still a chance that other groups of locusts may arrive in Nepal,” he said.

All the local and state governments are in alert state by mobilizing technical teams to control the possible losses the locusts can cause.

Melamchi Water To Reach Kathmandu On Saturday, Urged Locals To Cautions By Agencies 2 days, 21 hours ago