21 House Buried, 3 Killed And 7 Missing In Landslides In Bajhang And Bajura

21 House Buried, 3 Killed And 7 Missing In Landslides In Bajhang And Bajura 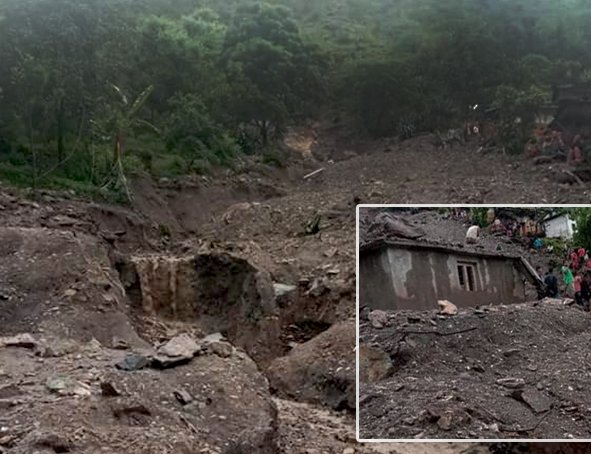 The landslides caused by torrential rain buried 21 house with 3 casualty and seven missing in Bajhang And Bajura. There persons were killed and four others went missing in the landslide that buried a total of 17 houses at Kedarsyaung Rural Municipality-8 in the district last night reports RSS.

Similarly, seventeen houses were buried in a landside that took place at Mallesi in ward no. 8 of Kedarsyun rural municipality on Friday.

Seven people have gone missing while 17 houses were washed away by the landslide triggered by heavy rainfall, said local resident Lokendra BK.

Likewise, Chief Administrative Officer of the rural municipality Dhanraj Joshi said that an entire settlement has been caught in the mudslide. A powerhouse has also been buried.

The incident site is some five hours walk from a place called Jhota in the Jaya Prithivi highway. An auxiliary road leading to the place has also been obstructed as a result of the landslide debris.

India Provides Grant For The Construction Of New School Building In Butwal By NEW SPOTLIGHT ONLINE 1 day, 13 hours ago

PM Oli Adopted A Rhino By Agencies 2 days, 2 hours ago

338 Households Displaced In Fungling Due To Fire By Agencies 2 days, 16 hours ago

Chanda Led Maoist And The Government To Hold Talks By NEW SPOTLIGHT ONLINE 3 days, 2 hours ago