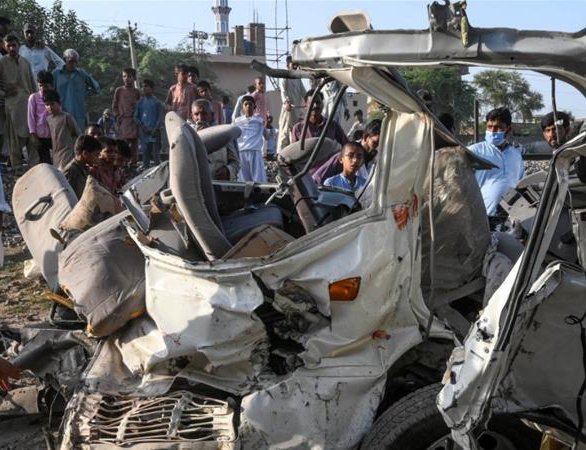 At least 22 people killed after bus they were travelling on hit by passenger train in Punjab province.

At least 22 people have been killed after a passenger train crashed into a bus carrying Sikh pilgrims at an unmanned railway crossing in eastern Pakistan, officials said.

Five people were also injured in the accident that took place on Friday in Sheikhupura district in Punjab province, according to a statement from Imran Gondal, a Pakistani government official whose department oversees Sikh pilgrimages.

Officials said the pilgrims were from the northwestern city of Peshawar and were returning from the Sheikupura-based shrine of Nankana Sahib when the crash happened.

Gondal said the death toll included 20 Sikh pilgrims, the driver and the driver's assistant. A four-year-old was among those killed in the accident.

Ghazi Salahuddin, the district police chief, said the dead and injured were taken to a nearby hospital.

"The crossing was unmanned and the driver of the van took a hasty decision by driving onto the tracks," Pakistan Railways spokeswoman Quratul Ain told AFP news agency, adding that the passengers were all Sikh pilgrims.

Pakistan Prime Minister Imran Khan offered his condolences to the families of the victims.

"[I] have directed relevant authorities to ensure facilitation and care for all the families. Our entire railway's operational safety SOPs will be reviewed immediately," he tweeted.

Images broadcast on local television showed the mangled van on the train tracks.

Pakistan's railway minister called for an immediate investigation into the crash. Pakistan has a long history of train accidents mainly because of poor infrastructure and lack of safety standards.

Army Enforces A Strict Lockdown In Bangladesh By Agencies 2 months, 3 weeks ago

Pakistan Offers Medical Support To India By Agencies 5 months ago