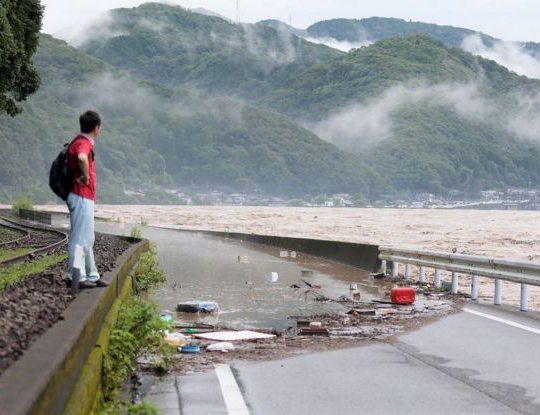 Flooding in parts of southern Japan caused by torrential rain has inundated many residential areas. Authorities say over 15 people have no vital signs and others are missing.

A band of clouds hung over southern Japan on Saturday, dumping rain on Kumamoto Prefecture although the downpour has eased for now.

The Kuma River has overflowed in more than 10 places.

Fourteen people have been found without vital signs at a nursing home in a flooded area.

Officials have been unable to make contact with seven other people.

A woman said, "It wasn't like normal rain. I honestly never imagined it could be so powerful."

A man said, "The smell of the river and the muddy water was intense. I could feel the vibrations from the churning water through the road next to the riverbank."

The Japanese government is sending some 10,000 Self-Defense Force members to the region. The Disaster Management Minister will also visit the affected areas.

Forecasters warn the weather front is likely to remain until around next Wednesday with more heavy rain expected.

They say there's a risk of flooding in low-lying areas, overflowing rivers, lightning strikes, and sudden gusts of wind.

Japan To Tighten Restrictions On Arrival By Agencies 2 months ago

Japan Grapples With Record-level Increase In COVID-19 Cases By Agencies 2 months, 2 weeks ago

Prince Akishino Proclaimed First In Line To Throne By Agencies 3 months, 2 weeks ago