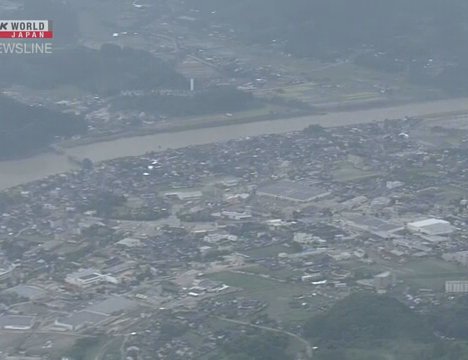 Rescue workers continue to search for missing people in Kumamoto Prefecture, southwestern Japan, after record rainfalls triggered floods and landslides over the weekend.

Officials say 24 people have been confirmed dead. A further 16 are without vital signs, and 12 others are missing. They say the full extent of the damage is still unclear.

Nine people have died in Hitoyoshi City. Another is reportedly without vital signs, and four are missing.

Nine people have died in Ashikita Town. Another is reportedly without vital signs, and one is missing.

Three deaths have been confirmed in Yatsushiro City.

Two deaths have been confirmed in Kuma Village, and five are missing. Flood water from a nearby river inundated a nursing home for the elderly, leaving about 50 residents and workers stranded. Fourteen of them were without vital signs.

One death has been confirmed in Tsunagi Town, and two people are missing.

Police, firefighters and Self-Defense Force personnel are continuing their search and rescue operations.

People have been left stranded in more than 10 districts across the prefecture. Officials say they are working to reach them quickly, including by building temporary roads.

Japan To Tighten Restrictions On Arrival By Agencies 2 months ago

Japan Grapples With Record-level Increase In COVID-19 Cases By Agencies 2 months, 2 weeks ago

Prince Akishino Proclaimed First In Line To Throne By Agencies 3 months, 2 weeks ago