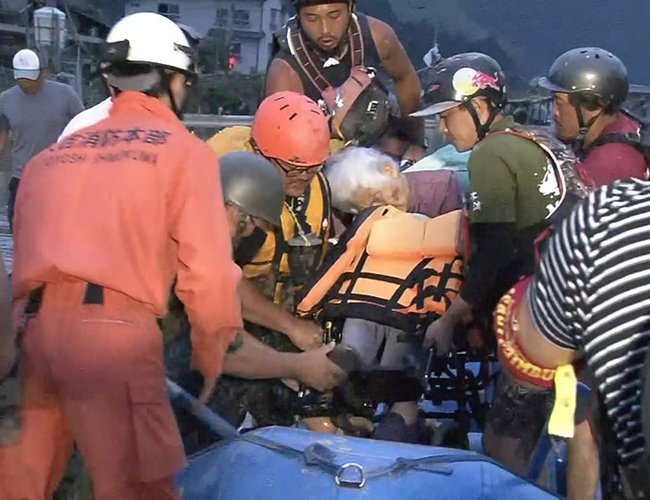 Japan's rainy season has brought death and destruction to the Kyushu region in the country’s southwest. At least 27 people have been killed by floods and landslides triggered by record downpours.

Residents of Kumamoto Prefecture are hardest hit by the flooding disaster. Local authorities report that as of Monday, 27 people are dead and 11 are missing. In addition, 15 are said to be without vital signs, a term used in Japan to describe fatalities that are yet to be officially confirmed.

In Hitoyoshi City, a 30-meter wide portion of the Kuma riverbank gave way, killing 11 people. One resident showed NHK his damaged house. He said the river rose sharply on Saturday morning and nearly reached the second floor. "It's such a mess, many pieces of wood came into my house. I can't think of what to do," he said.

Japan's Meteorological Agency has issued a heavy rain emergency warning for parts of Kumamoto and Kagoshima Prefectures in the Kyushu region on Saturday.

Senju-en nursing home is about 400 meters from the meeting of the Kuma River and one of its tributaries. It is surrounded by floodwaters and as of Monday, 50 elderly residents and staff members were temporarily stranded. A search and rescue team found 14 people there without vital signs.

"Water had already found its way into the first floor, making it impossible for rescuers to get inside. We used hammers and other tools to break the windows and force our way in," said Sakoda Shigemitsu, a member of local rafting tour company that joined in the rescue operation.

A similar tragedy occurred in 2016 at a nursing home in Iwate Prefecture, northern Japan. The facility was flooded, leaving nine people dead, during Typhoon Lionrock. The incident prompted a national review of nursing home evacuation practices.

One official in the village that houses Senjyu-en says the nursing home holds an evacuation drill twice a year. Staff members are trained to help elderly residents move up to the second floor, or evacuate to higher ground. The official says the village is trying to find out more about what happened on the weekend.

First floor of Senjyu-en. The entrance on the first floor appears completely submerged. Many people were rescued from the second floor.

More torrential rain is forecast for the Kyushu region on Monday and Tuesday. Japan's Meteorological Agency and local officials are urging people to evacuate early.

Evacuees face an added fear of the coronavirus spreading at designated shelters. Hygiene measures such as keeping clothes clean and frequent hand washing are being urged. Some people are choosing instead to stay in their vehicles or elsewhere, but that is making it difficult to check on their wellbeing.

Partitions are made of 2-meter long and wide cardboard pillars and beams covered with cloth. They are designed to help prevent infections while protecting the privacy of evacuees.

Experts are worried that evacuees are at special risk.

"People may lose their vitality and weight in summer and they may become more vulnerable to the infection by the new coronavirus," says University of Kochi Professor Kanbara Sakiko.

At Least 20 Demonstrators Killed In Myanmar By Agencies 3 months, 1 week ago

Japan To Tighten Restrictions On Arrival By Agencies 6 months ago

Japan Grapples With Record-level Increase In COVID-19 Cases By Agencies 6 months, 2 weeks ago

Prince Akishino Proclaimed First In Line To Throne By Agencies 7 months, 2 weeks ago