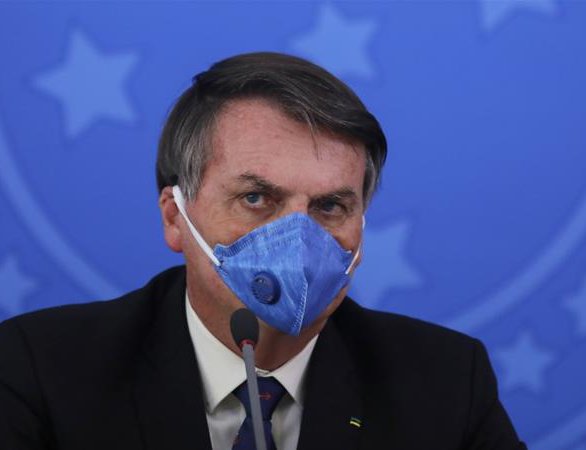 There are now over 11.6 million confirmed COVID-19 cases globally, with over 538,000 fatalities and more than 6.3 million recoveries, according to the latest tally from Johns Hopkins University.

Bolsonaro confirmed the test results while wearing a mask and speaking to reporters in capital Brasilia, and said he is already taking hydroxychloroquine - an anti-malarial drug unproven to effectively treat COVID-19.

"I'm well, normal. I even want to take a walk around here, but I can't due to medical recommendations," Bolsonaro said. "I thought I had it before, given my very dynamic activity. I'm president and on the combat lines. I like to be in the middle of the people."

The 65-year-old populist has often appeared in public to shake hands with supporters and mingle with crowds, at times without a mask. He has said his history as an athlete would protect him from the virus, and it would be nothing more than a "little flu" were he to contract it.

He also repeatedly said there is no way to prevent 70 percent of the population falling ill with COVID-19, and local authorities' measures to shut down economic activity would ultimately cause more hardship than allowing the virus to run its course.

For nearly two months, Brazil's fight against coronavirus has been in the hands of an interim health minister with no health experience before April.

He took over after his predecessor, a doctor and health care consultant, quit in protest over Bolsonaro's support for hydroxychloroquine.

Bolsonaro is "the democratic leader who has most denied the seriousness of this pandemic," said Mauricio Santoro, a political science professor at the State University of Rio de Janeiro.

"Him getting infected is a blow to his credibility. It will be seen as another example of the failure of his coronavirus response," Santoro said.

Political analyst Geraldo Zahran, speaking from Sao Paulo, told Al Jazeera it was only a matter of time before the president contracted the disease with his failure to social distance.

"It is surprising it took so long. In a way, he saw this coming. Since last night, he's been asking people to stay away and keep their distance, so he's taking this a bit more seriously now," said Zahran.

Bolsonaro on Tuesday compared the virus to a rain that will fall on most people and said that some, like the elderly, must take greater care.

"You can't just talk about the consequences of the virus that you have to worry about. Life goes on. Brazil needs to produce. You need to get the economy in gear," he said.