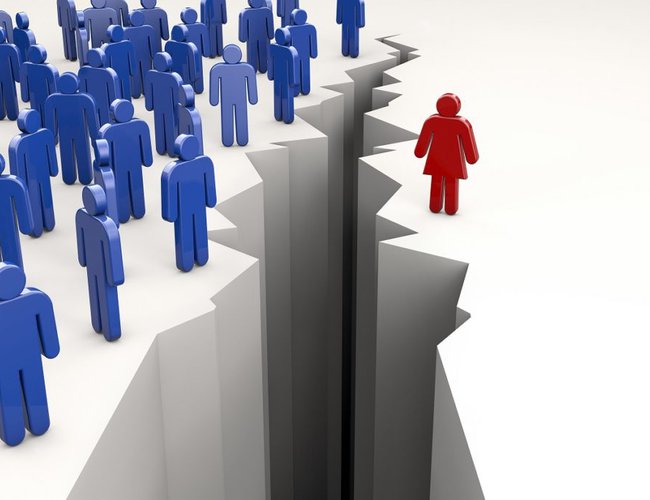 With the globalization, massive technological advancement has been observed which has revolutionized the whole world and transformed our daily lives. This digital revolution has not only reshaped the way we work but has also paved the way for numerous opportunities for us in the labour market. The major problem is, although the advancement of technology has been path-breaking to those who have access to these, it presents several challenges to those who do not have access to these technologies and are left behind. Digital divide is still there in the rural areas, especially in the developing and least developed countries in the world and disparities are increasing with the introduction of fast evolving technologies. The challenges are especially profound in women, who face a triple divide: digital, rural and gender.

At the Fourth World Conference on Women which was held in Beijing in 1995, 189 countries from around the world had collectively agreed that "it was essential to design, implement and monitor, with the full participation of women, effective, efficient and mutually reinforcing gender-sensitive policies and programs including development policies and programs at all levels, to foster the empowerment and advancement of women." But 25 years down the line, gender mainstreaming is still not been fully materialized in all policies and programs, except in political representation. All sectors and industry have been impacted with this, without leaving an exception onthe agriculture sector where women make up to almost half of the agricultural workforce in the developing countries, as per a report by The World Bank. In case of Nepal, women have bigger stake in agriculture sector than men. According to the Food and Agricultural Organization (FAO) of the United Nations, on average, women account for 60 to 80 percent of food production in developing countries. Women's contribution in the agricultural sector in these countries is unparalleled.

As the world is moving towards digitization, it has been realized that advanced technologies can offer valuable cost-effective and time-saving opportunities for agricultural development. Achieving the UN Sustainable Development Goal of "Zero Hunger" by 2030 would require more productive, efficient and sustainable food system and this is only possible through the technological innovation in the farming system. But this transformation should be done carefully through the use of gender-responsive approach to avoid the digital divide between people from different backgrounds, different economic condition and gender. Digital transformation in the agriculture sector should be done in such a way that it doesn't exacerbate the gap between rich and poor, rural and urban areas and different genders but rather have positive impact on poverty alleviation through higher food productivity and help improve gender equality through higher participation of women in digitized agribusiness, that will create chain reactions.

Adoption of latest technology in farming differs between women and men due to several factors. In case of Nepal, low human capital and the unpaid household works are the major reasons which prevent women from using various technologies in agriculture,both in pre-harvest and post-harvest. Their lack of knowledge and information about such technologies becomes their major constrains for not being able to use them. Bulk of household duties which consumes considerable amount of their time doesn't allow them to allocate some extra hour of a day to learn about these technologies.This lack of time prevents these women from improving their agricultural know-how and eventually hinders their adoption of modern technologies in agricultural activities.

Women in rural areas of Nepal are less likely to have access and ownership over land and other assets. They also lack disposable incomes. In addition, they do not have enough financial capital in their hands which prevents them from making long-term investment plans in digital technologies for farming. When women do not have ownership to property, their decision-making power with regard to investment is absent in the household as well as in the community. Apart from these, illiteracy, lack of education, social dynamics, cultural taboos and mobility constraints for women are such other important factors which prevents women from coming forward and make decisions regarding the agro-technological investments.

Poor infrastructure and load shedding is a major issue and access to internet facility is beyond the reach of people in various parts of the remote areas and difficult terrain.Even though they have access to such facility, digital literacy amongst women is much lower compared to men which limits women's use of such facility. Further, women and men do not have equal opportunity and control over such technologies. According to a report by International Telecommunication Union (ITU), only 1 in 7 women are using internet compared with 1 in 5 men in the least developed countries and this includes the rate about both the rural and urban areas. As an example, it can be understood that the difference would be much higher if compared only in the rural areas of Nepal. Lack of internet facility limits the women's ability to communicate with others and enable them to exchange information and learn about various new and innovative technological strategies to apply in their own agricultural activities. For some women who do not have basic literacy level, the whole process of using phone and internet itself becomes a daunting process which prevents them from getting advantage of such modern technologies to improve their agricultural prospects. Overall, due to lack of modern technologies most of the women farmers have just been limited to subsistence farming and are not able to move forward towards higher scale commercial farming which helps them in higher productivity and their overall economic development.

Government and development agencies can bring about the transformation and ensurehigher participation of women in the use of digital technologies in farming/agriculture,for example start a 'Train-and-Earn' programme could suit the best in Nepal's context. Making use of local radio which are more accessible and comfortable means to reach to even illiterate and uneducated women in the rural areas is a very good option. Similarly, as we know, in order to make the optimum use of the digital resources, sufficient training is needed hence gender-based agricultural training should be provided to women. Providing childcare facility during trainings could be a major incentive for women's higher participation in these training. On the other hand, agricultural marketing, if digitalis ed comprehensively, would help women deepen understanding and access to agro-markets, and gain tangible income from farming.As it is known that digital literacy is pivotal for using new digital technologies, government should incorporate computer courses starting from the primary level in school compulsorily in the rural areas of the country. Government should make significant investment in improving the technological infrastructures in the rural areas to build a skilled labor force for the future. Government with the support from local partners should introduce e-Agriculture service in practice which shall ease women farmers in buying seeds, fertilizers and other materials without bearing hassle to travel long distance. Further, government should provide financial assistance in the form of grants or subsidized interest rates for loan to the women farmers if they wish to invest in latest technological equipment.

Promotion of gender-responsive programs and projects for the use of technology is crucial for modernizing farming. This requires gender-sensitive leadership in all levels of government to make right decision for mainstreaming gender in the use of technology and gender-responsive budget allocation across agricultural sector. Research and analysis are always important, so that replication of digitization with least cost is possible. One such example would be of neighboring country India where The World Bank has brought about a program called "JEEVIKA" in order to support women farmers from the rural communities in Bihar. This program has been able to mobilise more than nine million women into self-help and producer's groups. According to The World Bank, JEEVIKA's approach of empowering women farmers and connecting them with formal agri-markets through digital technology has been very successful and now being replicated across India and other countries as far as, Afghanistan and Nigeria.Government of Nepal with support from various state and non-state partners can also initiate similar programs for women farmers in the rural areas of Nepal.

Sufficient allocation of budget for the development and adoption of advanced technologies to support women farmers will definitely increase yield and productivity, enhance efficiency and capability and proportionately reduces the reliance on huge manual labor. New technological development in farming such as introducing robotic seeding machines, automated watering and irrigation machines, driver less tractors, using drone to supervise and monitor the fields and crops needs to be done. Promotion of smart farming focused on women should be undertaken at all levels. Women's greater involvement in digitized agriculture will bring more than significant paradigm shift quickly in the traditional farming and food production system in Nepal in the coming years. It is the master key to unleash the power of women and economic development of Nepal. 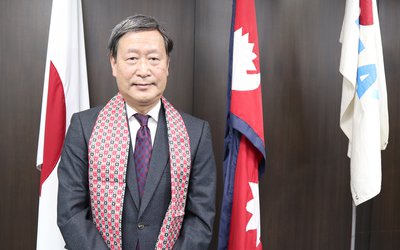 Development Of Nepal Is Always A Priority For JICA: Executive Senior Vice President of JICA Yamada By NEW SPOTLIGHT ONLINE 45 minutes ago 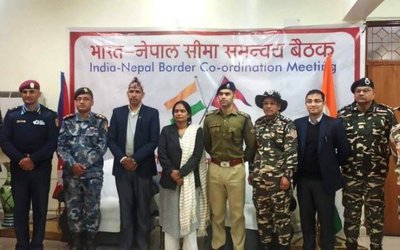 India Agrees To Remove Embankments Constructed At Nepal’s Side In Mahakali River By NEW SPOTLIGHT ONLINE 20 hours, 35 minutes ago 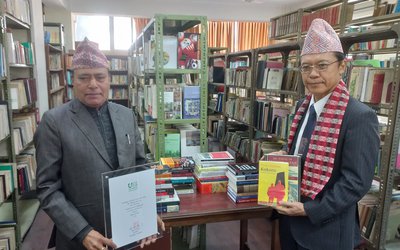 Japan Hands Over Books For Japanese Study To Campus Of International Languages By NEW SPOTLIGHT ONLINE 1 day, 1 hour ago 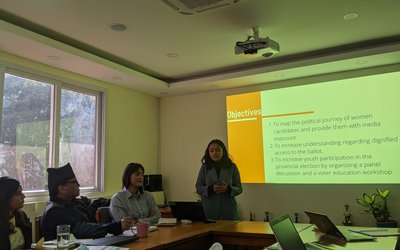 YOUTH AND WOMEN IN POLTICS : A Long Way To Go By Keshab Poudel 2 days ago 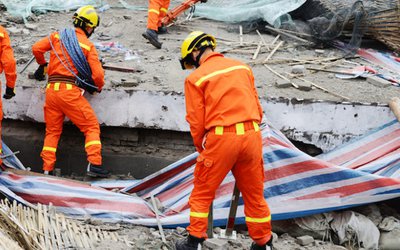 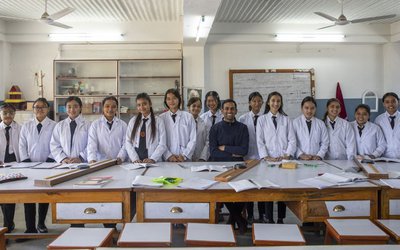