With the intense pressure within the party and outside on the remark of Prime Minister K.P. Sharma Oli and Ayodhya and Rama, the Ministry of Foreign Affairs issued a statement clarifying Nepal’s stand.

“Attention of the Government of Nepal has been drawn to the various interpretations of the remarks made yesterday by Prime Minister K P Sharma Oli during the 207th birth anniversary celebration of Adikavi Bhanu Bhakta Acharya, the author of the Ramayana in Nepali language,” said Ministry in its press release.

“The remarks made by the Prime Minister are not linked to any political subject and have no intention at all to hurt the feeling and sentiment of anyone.

“As there have been several myths and references about Shri Ram and the places associated with him, the Prime Minister was simply highlighting the importance of further studies and research of the vast cultural geography the Ramayana represents to obtain facts about Shri Ram, Ramayana and the various places linked to this rich civilization.” 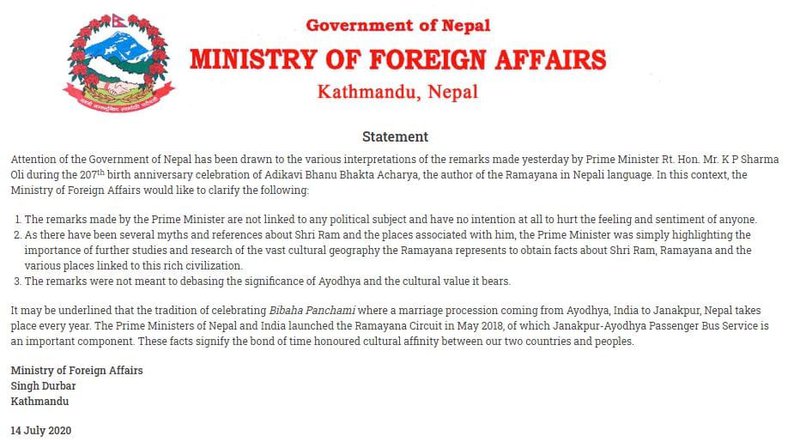 “The remarks were not meant to debasing the significance of Ayodhya and the cultural value it bears.”

Ministry reminded in its statement that the tradition of celebrating Bibaha Panchami where a marriage procession coming from Ayodhya, India to Janakpur, Nepal takes place every year.

“The Prime Ministers of Nepal and India launched the Ramayana Circuit in May 2018, of which Janakpur-Ayodhya Passenger Bus Service is an important component. These facts signify the bond of time-honored cultural affinity between our two countries and peoples,” said a Press release.

PM Oli Stresses The Need To End Gender Based Violence By Agencies 9 hours, 6 minutes ago

The United States In Partnership With ADB Completes Two Secondary Schools In Kathmandu By NEW SPOTLIGHT ONLINE 1 day, 6 hours ago

India Provides Grant For The Construction Of New School Building In Butwal By NEW SPOTLIGHT ONLINE 4 days, 1 hour ago

338 Households Displaced In Fungling Due To Fire By Agencies 5 days, 4 hours ago