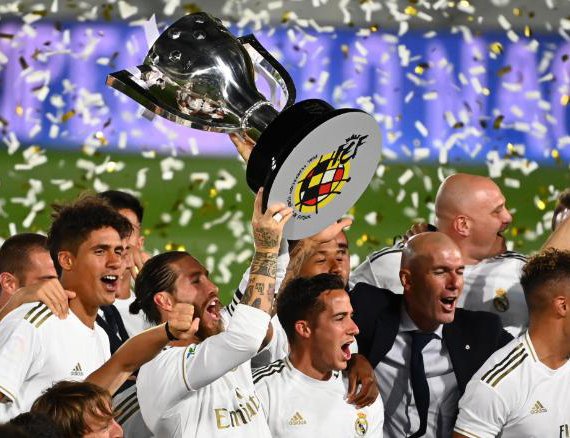 With another couple of swishes of that magical right boot, Karim Benzema ensured Real Madrid would be crowned La Liga champion for the time since 2017.

Real Madrid defeated Villarreal 2-1 securing the title shocking Barcelona which has lost its another match with Osasuna by 1-2.

Zinedine Zidane's side went into Thursday's game against Villarreal knowing a victory would be enough to secure just the club's third domestic league title this decade -- and the first since Cristiano Ronaldo's departure.

It was far from the team's best performance this season -- indeed it looked as though nerves were a hindrance early on -- but Benzema's brace was enough to seal a 2-1 win and bring the crown back to the Spanish capital.

This team has won countless trophies with Zidane in charge, though it appeared the occasion was getting the better of his players as several passes went astray in the opening stages. 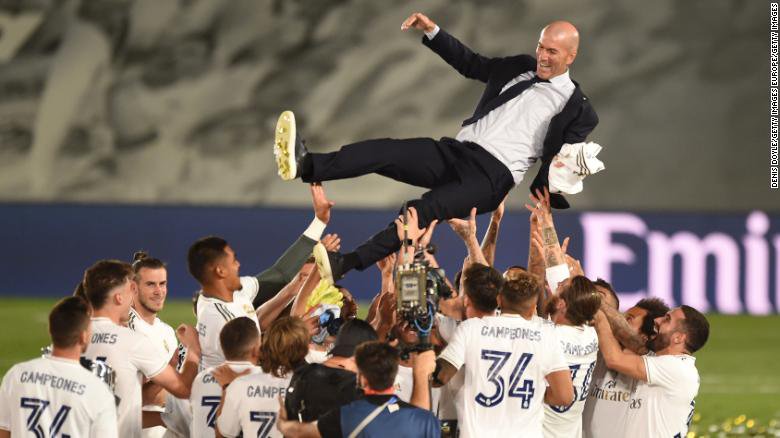 But it was Luka Modric, himself guilty of a few errant passes, who got the party started for Real, winning possession back in Villarreal's half and playing a pass into Benzema, who drilled the ball low under Sergio Asenjo.

With 15 minutes left on the clock, Benzema put the result beyond doubt from the penalty spot after Sergio Ramos had dubiously been brought down following a surging run from defense.

The penalty did have to be retaken after Ramos passed the first effort to Benzema, who had encroached into the area way before his teammate had touched the ball.

Real may never play with the same aesthetically pleasing style that Barcelona has become synonymous with over the years, but Zidane's side is still capable of some scintillating play.

This was perhaps best exemplified by the stunning team goal against Valencia last month, finished off by Benzema's audacious volley that had even Zidane holding his head in amazement.

Then there was the striker's sublime back heel against Espanyol, a piece of skill that was eulogized around the world and drew comparisons to Real Madrid legend Guti.

The first goal against Villarreal tonight came from another aspect of Real Madrid's game that Zidane has vastly improved. This team has never been known for its relentless high pressing, but Zidane has them pressing occasionally and intelligently, regularly winning the ball back deep in the opponents half.

In the end, it was Real Madrid's unstoppable form since the enforced break due to the coronavirus pandemic that swung the season in its favor. While Barcelona has stuttered and stumbled since the restart, Real has won all 10 of its games to open up what proved to be an unassailable advantage.

There could yet be more success this season, too, as Zidane's side will now be confident of overturning a 2-1 deficit against Manchester City in the Champions League.

Source: CNN and Other agencies

State Of Emergency Will Not Impact Games: IOC By Agencies 2 weeks, 3 days ago

Olympic Torch Relay Kicks Off As Japan Grapples With Coronavirus Concerns By Agencies 1 month, 1 week ago