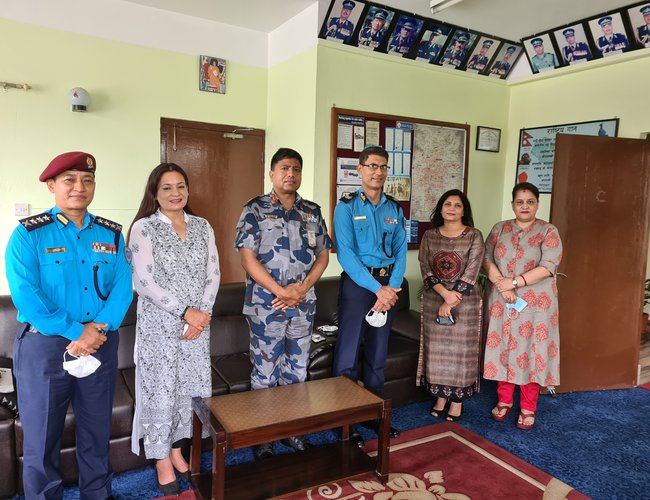 Zonta Club of Kathmandu, which has been working towards women rights and empowerment, has announced its initiative in collaboration with the Nepal Police to support the fight against Domestic Violence amongst women. Through this initiative, Zonta Club of Kathmandu has partnered with a team of 14 well renowned law practitioners and the Nepal Police in an effort to provide legal advice and consultations to the victims of domestic violence.

The victims will be provided free legal assistance if she is in need of any kind of help to file a case, compliant or require any other legal advises. Any domestic violence victim who has contacted Nepal Police by dialing 100 would be immediately provided with a legal consultant and other legal services directly via phone.

This initiative has been formed under the supervision of D.I.G Bishwa Pokhrel and S.S.P Kiran Bajracharya who has acknowledged to provide full support and cooperation to carry the work from today onwards. Along with this, Advocate Ratna Karki chairs the Zonta Advocacy Committee.

To combat the spread of COVID-19, Nepal government had imposed a nationwide lockdown from March 25, 2020 and since then there has been an increase in the number of domestic violence as many are trapped in home with their abusers. As a response, Zonta has taken up the initiative along with the support of the Nepal Police with the aim to support vulnerable women and the fight against domestic violence amongst women.

Zontian Seema Golchha, the President of Zonta Club of Kathmandu share, “There has been a rise in domestic violence since the lockdown was declared. Vulnerable women are trapped with their abusers at homes making them more vulnerable. We hope that along with the Nepal Police and the lawyers in our support, we will be able to assist the victims and further fight against domestic violence”

Zonta International, founded in 1919, is a leading global organization of professionals, empowering women worldwide through service and advocacy. Under the umbrella of Zonta

International, Zonta Club of Kathmandu was established in 2012. It is a legally registered NGO in

Kathmandu and has been working on the advancement of the status of women with the objective to improve the economic, education, health, and issues related to youth and violence against women at the national and local level through service and advocacy.

Experts To Conduct Comprehensive Geological Survey Of Melamchi By Agencies 2 days, 5 hours ago

Kathmandu Valley CDOs Decide To Extend Prohibitory Order For A Week By Agencies 2 days, 5 hours ago