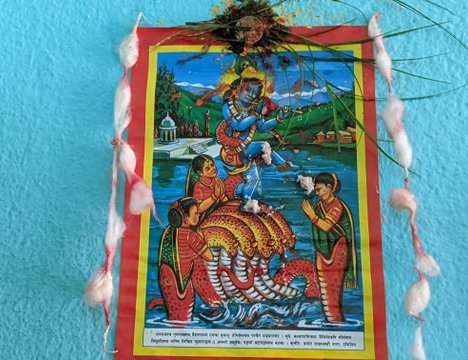 Although Nagpanchami is a very important day for Hindus around the world, Kathmandu Valley has its own way to celebrate the day. Known as city of ponds, there are several ponds in the valley dedicated to Nags.

Those include Nagdaha, Taudaha, Siddh Pokharai, Nag Pokhari and others. Nagpanchami is the festival dedicated to Naag or the serpant deities. It is observed on the fifth day of the bright half of the Nepali month of Shrawan as per the lunar calendar.

Religious fairs are also taking place at the nagdahas or ponds where the Nag (snake god) is believed to reside at Nag Pokhari in Naxal, at Dhapakhel in Lalitpur, Siddha Pokhari in Bhaktapur as well as other places across the country.

Today people worship the Nag and make special offerings of the dubo grass, flower and rice grains mixed with red vermilion powder to the Nags on the occasion.

Naag is taken as the god of water and rain, and as per the religious belief, it is said that the house where the Naag deity resides is bestowed with wealth and prosperity. It is believed that the worship of the snake goes back to the time before the ancient Vedic era.

Nepalese people have great respect for Nagapanchami Day which falls every year on the fifth day of the bright fortnight of Shravan (July) / Shravan Shukla Panchami. This year Nagpanchami falls on 25, July.

During Nagpanchami people wake up early in the morning and take bath with precious water then make images of the serpent /Nag, Ganesh, Kalash by cow dunk or white flour and worshiped. It is customary to visit serenely of Naga’s, Pound, well and Shiva temple and worship Serpent offering cow milk, sesame, barley, Doobo and Kush (sacred grass) and burning Shrikhand (sandalwood) incense. It is said that the aroma of Shrikhand is the dearest things of Nagadevata/Serpent. If we go to the nearby tree of Shrikhand, be too careful with the serpent.

It is not only in temples that you will see wood carvings depicting serpent figures; you may well see them even in some hotels in Nepal with a heritage bent. The reason serpents are so visible everywhere is because they play a big part in Kathmandu Valley’s culture.

There’s this eternally mystifying myth about the valley’s origin. Once upon a time, a long time ago, the valley was said to be an enormous lake called Nagdaha (naag: snake deity, daha: lake). As the name signifies, it was inhabited by a large number of serpents. Now, the valley was well protected on all sides by huge mountains, and the weather was lovely. In other words, if only the lake could be drained out, it would be a fine place to live in; agriculture could thrive. So it was no surprise that some enterprising folk got together to do so. Their endeavor was not taken well by the nagas, who were roused from their slumber. As a matter of fact, they were really angry. Since they had power over the rains, they decided to punish the intruding humans by creating a state of severe drought—no rain whatsoever for years.

The frightened humans didn’t know what to do; how to pacify the furious nagas? They were at a total loss, until one fine day, a king came into the valley; a king with great tantric powers. He immediately called upon his powers and succeeded in compelling the nagas to allow the rains to come down again. But, tantric that he was, he also acknowledged the terrible powers of the nagas and understood only too well that they had to be kept appeased. They had to be given the respect they were due. So he proclaimed that, henceforth, the fifth day of Shrawan (July/August) would be celebrated as Naag Panchami in their honor, a day in which they would be worshipped by humans. The king also realized that suitable sites would have to be provided where the nagas could live safely. Thus, certain specific lakes in Kathmandu Valley were decreed to be safe refuge for the nagas. The lakes so chosen were Taudaha in Kathmandu and Nagadaha in Lalitpur.

Taudaha is a large lake in Chobar, some six kilometers from Kathmandu, to the southwest. Aside from its cultural significance, it is also a refuge for many wetland birds, it being the only remaining natural lake in Kathmandu Valley. People come here during Naag Panchami (August 1 this year) to pay homage to Karkotak Naag, the king of the nagas. There’s a lot of flora and fauna around the lake as well. Nagadaha is located in Dhapakhel of Lalitpur district. It is a large natural pond (about five hectares). Aside from these two, there is a man-made pond to the east of the former royal palace that is small in size. It has a totem pole in its center with a naga on top. Like the bigger sites, this too is where devotees flock to during Naag Panchami. On this day, you’ll see most houses in the valley with a colorful picture of a naag pasted with cow dung over, or beside, their main door. You’ll also see Lord Krishna featuring prominently in some of the pictures. That’s because there’s another prevalent myth about Naag Panchami in the Hindu religion. It is said to be a day to celebrate the victory of Lord Krishna’s victory over Kaliya, an evil and gigantic serpent.

Another festival with serpentine connotations in Kathmandu Valley is the Rato Matsyendranath Jatra, which is celebrated every year for month (May/June). It is a festival participated in by thousands of Patan-dwellers who haul a giant chariot containing an image of Lord Matsyendranath through the lane of the city, with various sites designated as resting spots for a certain period of time. The origins of this colorful (and vigorous) festival are as mystical as that of any other festival. Here’s how the myth goes: many centuries ago, there was a great sage called Goraknath who dwelled in a cave in Gorkha. Once, he happened to come to Patan, and as is the norm for ascetics, went door-to-door seeking alms. Now, the locals were not exactly that generous lot, and in fact, the sage was subjected to some disrespect as well. In his righteous anger, he decided to bring about a drought as never seen before by the valley denizens. With this objective in mind, he promptly sat down on the heads of the nine rain-bringing nagas. Then, he started meditating, and in doing so, slipped into a trance that lasted days on end. The rains stopped pouring down because the nagas were immobilized.

The people begged him to break his trance and get down from the nagas’ heads. Desperation prevailed, since the mighty sage remained unmoved. Now, luckily, there were a couple of cunning fellows around, and they devised a clever plan of action. They traveled all the way to Assam in India, where resided Goraknath’s teacher (guru), Matsyendranath. He was brought to Kathmandu posthaste. On realizing that his guru had come to see him, Gorakhnath promptly stood up in respect, and his trance was broken. The nagas were thus liberated and free once more to do what they did best, that is, to make the rains come pouring down on the valley. With so much depending on the nagas, it is, therefore, no wonder that the people of Kathmandu Valley hold so much respect for them. And, no wonder that you may see more than just a couple of serpent figures in the wood carvings around hotels in Nepal.

Nepali people worship snake gods, also called the Nagas during Nag Panchami. In the ancient time Nagas halted rain from pouring over Nepal. The king of that time also happened to be a Tantric and so he used his power to make Nagas let go of rain. The king succeeded in doing so but he also honored the majestic power of Nagas by turning the day of victory into a festive occasion of Nag Panchami. On Nag Panchami, devotees put a picture of Naga high above their doorway and perform puja with necessary puja items. Offerings in the form of food are left in the yards and paddies for snakes. Naga temples in the valley at Nagpokhari, Taudaha and Nagdaha are thronged with devotees on this day.

Similarly, in this Puja (worship), there is a law to use white lotus flowers and Lava (parched paddy that is grown in the flower). Likewise, people draw the picture of Serpents and past on main entrance of house/door, offer the Yogurt, Dubo, Kush, Sindur (a traditional vermilion red or orange-red colored cosmetic powder), Chandan, etc. for worship. People believe that there is no lighting in the house, no fear of firing and snakes and other poisonous species from the worship of Nag on this day. This day is believed to have started the winter with the end of the rainy season.

According to astrological classical belief, Nag Panchami is an auspicious day to start any kind of new work or business. There is a religious belief that the Serpent will out from the newly built house by worshipping on Nag Panchami if they made the residents. This ritual is not a pretext for the law. Not superstition. It also has its own scientific significance.

The real historical roots of the Nag Panchami are found in connection with the Mahabharata. The king named Parichhit was killed by Taksha serpent. And his son Janmajay started the process of killing all the snakes of the world in retaliation for the death of his father, and for this, he started a great sacrifice. All the sages, saints, scholars were invited to this Mahayagya, all snakes other than Taqsha was burnt out from such a powerful fire. However, the Taqsha asylum Indra's to the heaven and come back to Janmajay. Everyone is surprised to see this. Immediately, Astika the son of Mansdevi apologizes to Janamjaya about his father death. All the serpents sacrificed in the sacrifice receive a rebirth.

Shravan Sankranti 2021: Months Of Shiva And Month Of Festival By NEW SPOTLIGHT ONLINE 2 weeks ago