An Additional 3.9 Million Children Under 5 Could Suffer From Wasting

UNICEF calls for accelerated action to prevent and treat malnutrition caused by the COVID-19 pandemic as humanitarian community appeals for $2.4 billion to improve maternal and child nutrition globally 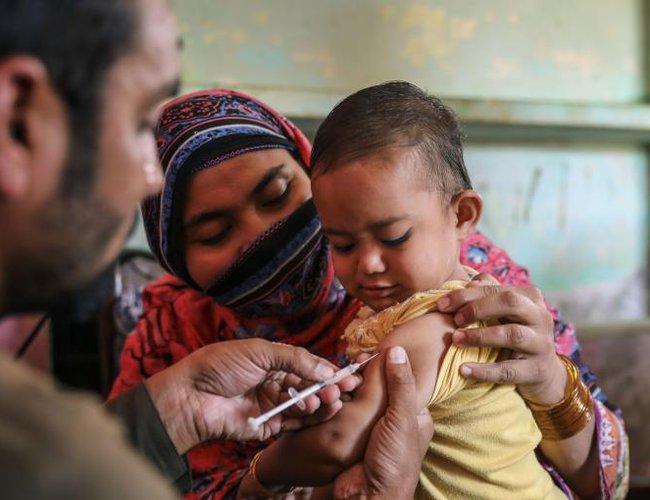 An additional 3.9 million children in South Asia under the age of five could suffer from wasting – and therefore become dangerously undernourished – in 2020 as a result of the socio-economic impact of the COVID-19 pandemic, UNICEF warned today.

According to ananalysis published in The Lancet, 6.7 million children globally could suffer from wasting and over half (58 per cent or 3.9 million) would be from South Asia alone.

“It’s been seven months since the first COVID-19 cases were reported and it is increasingly clear that the repercussions of the pandemic are causing more harm to children than the disease itself,” said UNICEF Executive Director Henrietta Fore. “Household poverty and food insecurity rates have increased. Essential nutrition services and supply chains have been disrupted. Food prices have soared. As a result, the quality of children’s diets has gone down and malnutrition rateswill go up.”

Wasting is a life-threatening form of malnutrition, which makes children too thin and weak, and puts them at greater risk of dying, poor growth, development and learning. According to UNICEF, even before the COVID-19 pandemic,47 million children were already wasted in 2019, over half of whom (25 million) lived in South Asia. Without urgent action, the global number of children suffering from wastingcould reach almost 54 million over the course of the year. This would bring global wasting to levels not seen this millennium.

The Lancet analysis finds that the prevalence of wasting among children under the age of five could increase by 14.3 per cent in low- and middle-income countries this year, due to the socio-economic impacts of COVID-19.Such an increase in child malnutrition, combined with disruptions in vitamin A supplementation and breastfeeding, would translate into over 10,000 additional child deaths per month globally.

The estimated increase in child wasting is only the tip of the iceberg, UNagencies warn. COVID-19 will also increase other forms of malnutrition in children and women, including stunting, micronutrient deficiencies and overweight and obesity as a result of poorer diets and the disruption of nutrition services. UNICEF reports from the early months of the pandemic suggest a 30 per cent overall reduction in the coverage of essential – and often life-saving – nutrition services.

In South Asia, these service disruptions have been more severe. For example, during the initial weeks of lock-down, the treatment of severe wasting ground to a halt in India and Nepal, while a fear of infection and lack of protective equipment for health workers led to an estimated 40 per cent and 75 percent decline in admissions to treat severe wasting in children in Afghanistan and Bangladesh respectively.

Furthermore, most countries in the region had to postpone vitamin A supplementation, and so millions of children under five years are missing the immune-boosting effects of vitamin A during a time of greatest need. While essential nutrition services are now resuming, they have not yet returned to prior capacity.

“We are also deeply concerned about the potential impact on breastfeeding practices. It is essential that mothers are encouraged and supported to continue breastfeeding, even if they have COVID-19 infection”, said Jean Gough, UNICEF Regional Director for South Asia. “Breast milk provides the best nutrition for babies as well as protection from a range of life-threatening infections”, she added.

In a commentary to The Lancet report, also released today, the heads of UNICEF, the Food and Agriculture Organization, the World Food Program and the World Health Organization warned that the COVID-19 pandemic is undermining nutrition across the world particularly in low- and middle-income countries, with the worst consequences being borne by young children. More children and women are becoming malnourished due to the deteriorating quality of their diets, the interruption of nutrition services, and the shocks created by the pandemic.

Humanitarian agencies immediately need USD 2.4 billion to protect maternal and child nutrition in the most vulnerable countries from now until the end of the year. The heads of the four United Nations agencies appeal to governments, the public, donors and the private sector to protect children’s right to nutrition by:

Safeguarding access to nutritious, safe and affordable diets as a cornerstone of the response to COVID-19 by protecting food producers, processors and retailers; discouraging trade bans; and designating food markets as essential services;

Investing decisively in support for maternal and child nutrition by protecting breastfeeding, preventing the inappropriate marketing of infant formula, and securing children and women’s access to nutritious and diverse foods;

Re-activatingand scaling up services for the early detection and treatment of child wasting while expanding other life-protecting nutrition services;

Maintaining the provision of nutritious and safe school meals by reaching vulnerable children through home delivery, take-home rations, cash or vouchers when schools are closed;and

Expanding social protection to safeguard access to nutritious diets and essential services among the poorest and most affected households, including access to fortified foods.

“We are encouraged by the efforts being taken across South Asia to resume nutrition services”, said Jean Gough. “It is essential that we combine efforts across health and social protection to prevent more children from becoming wasted, and to identify and treat those that do.”

Health Ministry Asked To Close The Schools In 14 Districts Classified As Extremely Affected By COVID-19 By NEW SPOTLIGHT ONLINE 9 hours, 52 minutes ago