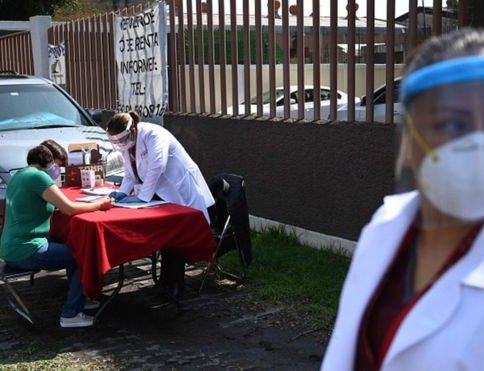 There are now about 16.4 million confirmed COVID-19 cases globally, with over 650,000 fatalities and more than 9.5 million recoveries, according to the latest tally from Johns Hopkins University.

The U.S. has recorded over 4.28 million infections and over 147,000 deaths. The White House and Senate Republicans have reached "an agreement in principle" on the next coronavirus relief bill. White House Chief of Staff Mark Meadows said the package will likely be unveiled Monday afternoon.

The country's director of the National Institute of Allergy and Infectious Diseases, Dr. Anthony Fauci, said researchers hope to have 15,000 participants enrolled in the Phase 3 trial of the Moderna COVID-19 vaccine by the end of the week.

The trial started on Monday morning in the state of Georgia, and is expected to enroll around 30,000 adult volunteers.

The Republic of Korea (ROK) said the person who fled to the Democratic People's Republic of Korea (DPRK) was not infected with the novel coronavirus, after the DPRK claimed the individual was the first suspected case of COVID-19 in the country.

Bans on international travel cannot stay in place indefinitely, and countries are going to have to do more to reduce the spread of the coronavirus within their borders, the World Health Organization said on Monday.

Beijing on Monday recorded two new COVID-19 cases, one related to a confirmed case from northeast China's Dalian City and one from overseas, the municipal health commission said on Tuesday. The new cases came after the capital city had reported no new cases for 21 days.

Governor of the state of São Paulo João Doria on Monday reaffirmed that vaccines against the coronavirus should be able to start distribution in January if the current trials are successful.

Russia reported 5,635 new cases on Monday, its lowest daily rise since April 23, pushing its national tally to 818,120, the fourth largest in the world. A total of 85 people have died over the last 24 hours, bringing the official death toll to 13,354.

Germany's total number of confirmed cases increased by 340 to 205,609, and the reported deaths remained unchanged at 9,118.

The Philippines reported 1,657 new cases with 16 new deaths, raising the total number of confirmed cases to 82,040 and death toll to 1,945. President Rodrigo Duterte said the country now has 93 accredited testing laboratories nationwide and aims to conduct 1.4 million tests by the end of July.

Oman recorded 1,053 new cases and 9 more deaths on Monday, bringing the total number of confirmed cases to 77,058. The death toll now stands at 393. The country will impose a 14-day quarantine on all visitors entering the country, with its citizens allowed to quarantine at home.