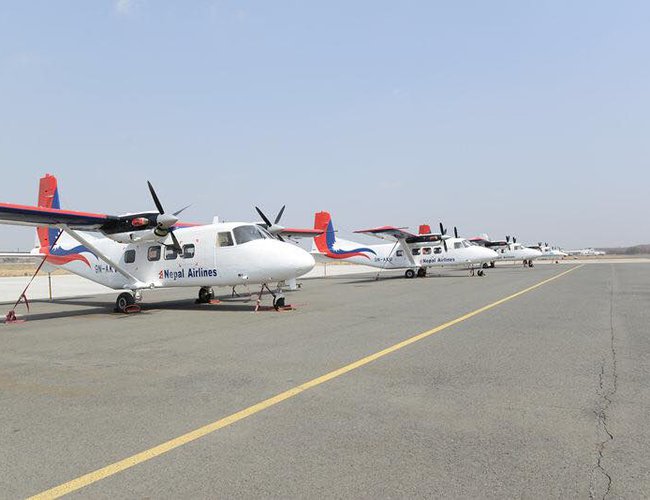 As Nepalese and Chinese leaders were greeting the exchange to strengthen bilateral relations marking 65 anniversary of establishment of bilateral relations, Nepal Airlines Corporation (NAC) has grounded all its six Chinese aircraft from Saturday reports The Himalayan Times Daily.

The daily reports that the two aircraft had been already grounded earlier and the remaining four planes were also grounded from today, said Archana Khadka, spokesperson for NAC.

“From now on we will be operating our two Twin Otter aircraft for domestic flights,” she informed, adding, “We have submitted a letter to the Ministry of Culture, Tourism and Civil Aviation (MoCTCA) to do the needful with the four aircraft that were grounded today.”

NAC had received one MA60 and one Y12E aircraft on aid from the Chinese government while one MA60 and three Y12E were provided by the Nepal government to NAC. However, as all the six aircraft were not able to make any profit, the corporation’s board decided to ground all the aircraft, Khadka reportedly

She said that NAC is waiting for MoCT- CA’s decision on what to do with these aircraft.

The daily reported citing NAC spokesperson that the corporation has already faced losses amounting to Rs 1.90 billion till last fiscal year. She said that the national flag carrier cannot afford these aircraft anymore and now the government itself has to decide what to do with these aircraft.