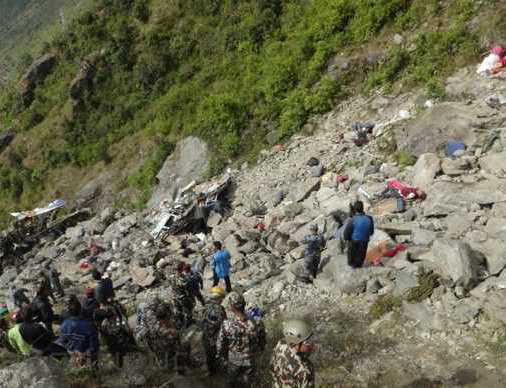 Thirty-five households of Bhurke rural municipality-2 have been displaced as a result of landslide. Landslide on the top and well as below the village forced the residents of the village to leave their home for safety, police said reports Rastriya Samachar Samiti (RSS).

Fearing more landslides due to the incessant rainfall, the locals have moved to higher ground and are living in temporary tents, said local resident Dipak Bahadur Khadka.

According to RSS, All the 35 households are now confined to a single location and spending sleepless nights fearing landslide, the police post in Dauda confirmed.

Similarly, four members of a family have died after their house was buried in a landslide. The incident took place on Friday night when the house of Raju Majhi in Tahatim in Ruruchetra rural municipality-5 was buried by the landslide.

Those killed in the incident are Raju's 30-year-old wife Bina, his 10-year-old son Hemant, seven-year-old son Sagar and 10-months-old daughter Binita, according to ward no 5 chairperson Hari Prasad Gyawali. A huge rock along with landslide triggered by heavy rainfall fell on the house, burying those inside it.

The bodies of all four have been retrieved. Meanwhile, police team from the Area Police Office Ridi has left for the incident site.

FLOOD AND DISASTER Unprecedented Loss By A Correspondent 1 month ago

48 Killed, 31 Missing And Hundred Displaced By The Recent Floods By NEW SPOTLIGHT ONLINE 1 month, 2 weeks ago