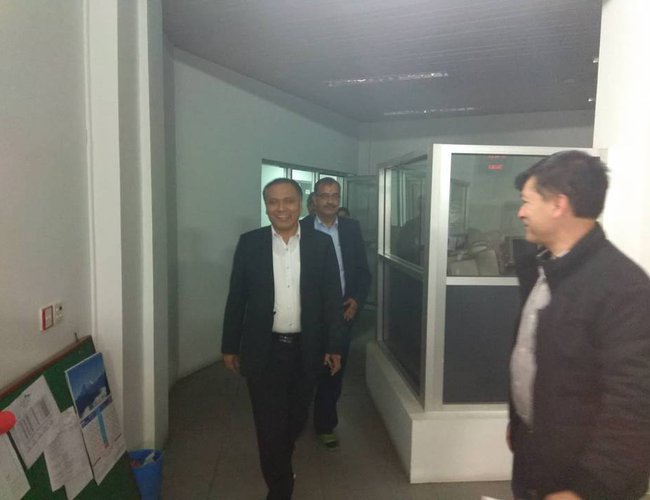 Although Managing Director of Nepal Electricity Kul Man Ghising is still in mourning following the death of his 98-year-old father days ago, he came out with emergency direction and plans to manage the electricity supply reduced by shut down of power plants caused by the sudden monsoon flood of in the second week of July.

As flood disrupted Kali Gandaki A, Middle Marsyangdi, Trishuli, Debhighat and Middle Bhotekosi and many other Hydropower plants, there was a shortfall of over 500 MW of electricity. MD Ghising had no option other than to make a move.

As the flood had damaged four major plants and two medium ones reducing the electricity generation by 500 MW, MD Ghising moved out from his mourning and took up the regular job. Directing and managing the team, MD Ghising restored the power supply importing electricity from India causing a minimum disturbance.

Despite the short supply by almost half of electricity, Ghising, who is in isolation, arranged everything, working with his technical team at NEA. Had not he activated it, there would have been a long power cut again. Instead of placing people in dark, MD Ghising preferred to break his isolation for the sake of customers.

MD Ghising said that the flood has badly damaged the generation and transmission sector. MD Ghising said many hydropower plants including those owned by NEA and private sector were shut down, reducing 40 percent of electricity generation.

Landslide and floods triggered by the rain have badly damaged some hydropower plants owned and operated by Nepal Electricity Authority and private sector cutting almost 500 MW of power supply.

According to Nepal Electricity Authority, those include 240 MW power from NEA and 250 MW of the private sector. Due to floods, Nepal’s largest 144 MW Kaligandaki A Hydropower Plant was shut down since Friday morning. According to the head of Kaligandaki A Pashupati Gautam, the operation of the power plants is uncertain due to the intensity of flood.

He said that alternative arrangements had already been made to import the electricity from India through Katiya and Dhalkebar.

MD Ghising said that NEA’s technical manpower has already been mobilized to start the maintenance and restoration of transmission lines and power plants. He said that technicians are working day and night to restore the system and rehabilitated the damaged sites.

The 45MW Upper Bhotekosi and other plants with a capacity of 240 MW have also been shut down. The heavy rain also damaged the Kabeli-corridor Transmission line in Siddhihumka halting 140 MW power evacuations. Due to heavy rain, transmission and distribution lines in other parts of the country have also been damaged.

US And Nepal Work Together All The Time: US Secretary Of State By NEW SPOTLIGHT ONLINE 2 hours, 21 minutes ago

Discussion At Political Level Continues To Push Ahead With MCC: PM Deuba By Agencies 1 week, 1 day ago