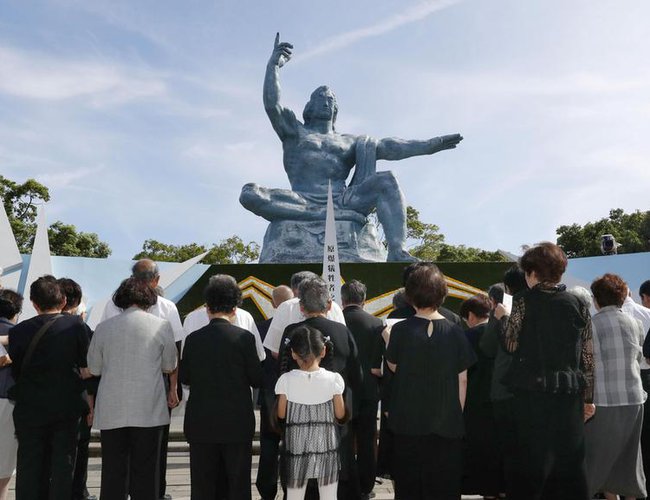 People in Japan are remembering the victims of a catastrophic event during World War Two. Exactly 75 years ago, an American warplane dropped an atomic bomb on the southwestern city of Nagasaki ... just three days after one leveled Hiroshima.

People gathered at a ceremony on Sunday to hope for a world without war and nuclear weapons.

Every year, thousands attend the ceremony at the city's peace park.

But due to the coronavirus pandemic, this year there was no seating for the public.

About 500 people attended, including atomic bomb survivors, also known as "hibakusha." Fukahori Shigemi was 14 at the time of the bombing and lost his four siblings. He is Catholic and met Pope Francis during his visit to Nagasaki last year.

Fuahori said, "This year marks 75 years since the bombing, and the hibakusha are passing away one after another. I am determined to keep fighting to make Nagasaki the last place to suffer an atomic bombing, while keeping in my heart the message of the Pope that we must abolish nuclear weapons."

Nagasaki Mayor Taue Tomihisa said the coronavirus pandemic and the problem of nuclear weapons both affect everyone on earth.

Taue urged the Japanese government to sign the Treaty on the Prohibition of Nuclear Weapons that was adopted at the United Nations three years ago.

He said, "Among the nuclear-weapon states and countries under the nuclear umbrella there have been voices stating that it is too early for such a treaty. That is not so. Rather, nuclear arms reductions are far too late in coming."

The treaty has yet to take effect, as nuclear and non-nuclear nations remain divided on the issue.

At least 50 countries need to ratify the pact for it to come into force. So far, 43 have done so. The push for nuclear disarmament remains stalled.

Prime Minister Abe Shinzo says Japan will make contributions to nuclear disarmament ... but the government maintains that Japan will not join the UN treaty.

Abe said, "In Nagasaki, where prayers for lasting peace continue, I pledge that Japan will be committed to realizing a world without nuclear weapons."

The average age of the survivors is now over 83. As they age, they are struggling to pass on their experience ... especially this year as the pandemic deprives them of the chance to speak to people in person.