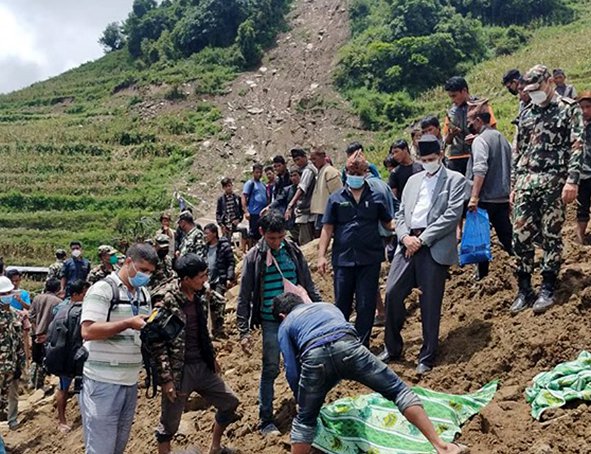 Dead bodies of 11 persons who were killed as landslides buried their houses here at Lidi village in Jugal Rural Municipality this morning have been recovered.

The identity of the bodies of five were ascertained, said Madav Kafle Deputy Superintendent of Police (DSP) in Sindhupalchowk District Police Office.

He said the rescue operation for those missing in the landslides were going on.

At least 44 people are feared to have gone missing in the landslides.

The landslides that occurred Friday morning had buried 13 houses.

Name list of those whose houses have been damaged:

Forty-four people are feared dead after a landslide swept away 37 houses in Lidi in Jugal Rural Municipality, Sindhupalchowk, this morning. Bodies of 10 locals have been recovered from the landslide debris, while 34 people have gone missing.

Among the bodies recovered by Nepali Army, Nepal Police and locals, four were that of children.

Fourteen people injured in the incident were airlifted to Sindhupalchowk headquarters Chautara and Kathmandu for treatment. Locals suspect that more than 34 people might have gone missing in the mudslide.