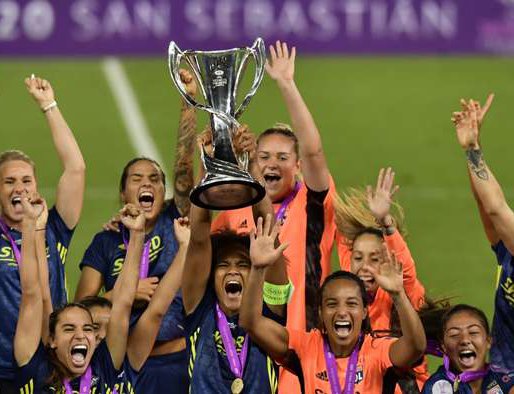 It's a feat that has only been achieved once - by Real Madrid in the 1950s, when Alfredo Di Stefano was the star in Spain. That is, until now.

On Sunday, Lyon wrote their names into history, again, by winning their fifth Women's Champions League (UWCL) title in a row, beating Wolfsburg 3-1 in Bilbao.

Every time this team steps on a pitch, they seem to set new records. No one has played in more semi-finals, more finals, or won more UWCL titles in history than them, a record they have now extended from six to seven.

Bouhaddi is 33 years old and has just signed a new contract until 2024. Le Sommer and Renard are 31 and 30, respectively, while Majri is just 27 years old. This isn't a dynasty that is going to end any time soon.

Complementing these experienced players are young players who have been immersed in the elite mentality it takes to stay at the top for so long.

Delphine Cascarino, for example, was the star of the show against Wolfsburg. Her pace out wide was far too much for Wolfsburg to deal with, allowing her to burst through and tee up Le Sommer for the opening goal, then forcing Sara Doorsoun-Khajeh into a lunge that actually injured the German defender before half-time. She's 23 years old.

But it's not just about the players who come and stay here, either. That's what makes Lyon so special.

"We have had a squad for a number of years and a president who believes in this, who has given us money and resources to build a top level side," Renard told the press on Saturday. "Players come and go but we try to keep this Lyon DNA.

"I can’t win trophies on my own. I win silverware because there are players in the squad that have been at the top for so long.

"I came in at 16, I learned from [Camille] Abily, [Elodie] Thomis and so on. You can learn a lot from those players. In different teams, we’ve always had the same mindset."

It doesn't matter who is on the pitch, when those players have that Lyon badge on their shirt, they know what to do.

This time, the final was won without the Champions League's all-time top goalscorer, Ada Hegerberg, on the pitch. It was won without Amandine Henry too, their midfield general only fit enough for the bench.

Nikita Parris was suspended, but has come in to do a fantastic job in Hegerberg's absence since her awful ACL injury. In defence, Sakina Karchaoui has done a stellar job on the left in the last two games, only making her club debut in the semi-finals following a summer move from Montpellier.

Players like Karchaoui don't have the same experience as someone like Renard, but they were calm and composed all the same when it came down to the last few minutes of this final and Lyon were leading just 2-1, before former Wolfsburg star Sara Bjork Gunnarsdottir added a third.

Lucy Bronze, one of the best players in the world, is set to move on this summer, but she will be efficiently replaced, as is the Lyon way. When their current superstars, the likes of Renard and Henry, finally retire, they too will be.

Most impressive of all is that the won't buy new superstars to replace those that depart. They will sign players with raw talent, great potential and the desire to work hard, who will go on to develop into world-beaters at the club.

"When you work at Lyon, you understand why they win everything," former Lyon midfielder Kenza Dali, currently at West Ham, said this week.

"Every day is a high level. When I spoke with Lucy Bronze when she signed at Lyon, we spoke about the difference between England and France. She said, ‘Every day is a game day for me’.

"Every training is so hard, really hard, they train so hard. You have to win your place every day. You have to be at your best every day and that’s why they win everything."

As long as that environment remains, it will continue to be nigh-on impossible to stop this Lyon team from continue to set records, and then break them.

Whoever does manage to stop their dominance will be a very, very special team indeed.