While the fans of the Bundesliga club clearly do not expect the Argentine to sign, all money donated will go to a good cause 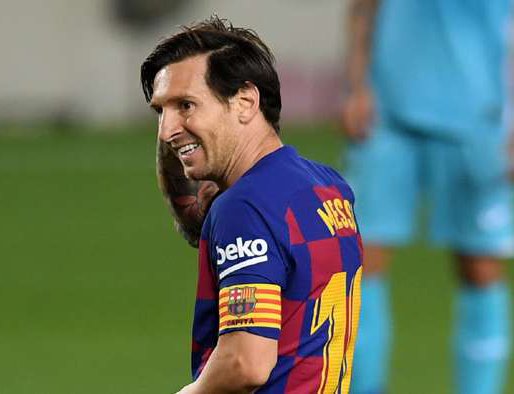 In response to the news that Lionel Messi has handed a transfer request in to Barcelona, Stuttgart fans have rallied around to make an audacious crowdfunded bid for the Argentina superstar.Goal

Messi believes that he is out of contract with the Primera Division side and eligible to depart on a free transfer this summer, but La Liga has ruled in favour of his club, meaning any team that wants to sign him is likely to have to stump up his release clause of €700 million (£627m/$835m).

The Stuttgart supporters are apparently unperturbed by such an eye-wating amount of money and have set their sights on raising €900m (£805m/$1bn), presumably to finance the superstar wages that come with such a name.

In order to generate the finances required for a deal to take place, the fans of the side that finished third bottom of the Bundesliga last season - and avoided relegation only because of their success in a play-off - are holding an unlikely whip round.

A statement on the GoFundMe page states: “We VfB fans are collecting money to pay for Lionel Messi's transfer. In the event that the planned amount is not reached on time or Lionel Messi joins another club, 100% of the money raised will be donated to Viva con Agua.”

Formed in St Pauli, Via Con Agua “is a non-profit organisation committed to ensuring that all people worldwide have access to clean drinking water”.

Manchester City, meanwhile, are leading the way in the race to sign Messi, while Paris Saint-Germain and Inter are also credited with a close interest in the player. All three clubs benefit from wealthy owners and are not having to rely on crowdfunding to generate their finances.

Stuttgart, whose star players include Orel Mangala, Nicolas Gonzalez and Silas Wamangituka, have thus far been bringing in far more modest signings this summer than Messi.

Waldemar Anton and Gregor Kobel have arrived from Hannover and Hoffenheim for reported fees of €4m (£3.5m/$4.7m), while Konstantinos Mavropanos has arrived on a one-year loan deal from Arsenal.

They will begin their Bundesliga campaign against Freiburg on Saturday, September 19.

The Argentine superstar's mind is set on leaving Camp Nou - and it is probable that he joins up with old ally Pep Guardiola, according to Toni Freixa

Lionel Messi will leave Barcelona this summer and is “likely” to move to Manchester City, according to presidential candidate Toni Freixa.

There had been speculation that the Argentine, who stunned the footballing world by handing in a transfer request at the club last week, might change his mind if current president Josip Maria Bartomeu quit his role, but according to one of the men gunning to take the position, that will not be the case.

Pep Guardiola’s side are presently leading the chase for the six-time Ballon d’Or winner, who believes he has a clause in his contract eligible to allow him to leave on a free transfer, despite La Liga ruling otherwise.

Man City face competition from Paris Saint-Germain and Inter for the superstar’s signature – the race for which is set to hot up in light of the Freixa’s words and the news that Messi did not show for training on Monday.

“As I have heard from several sides, the decision the player has come to is one that has matured over several years and is irrevocable. I don't believe that there is any going back,” he told Goal.

Freixa explained that the 33-year-old’s desire to leave is driven by the fact that Barcelona have fallen from their pedestal as one of Europe’s leading sides.

Not only did they surrender their Primera Division title to Real Madrid in a limp fashion after the suspension of play due to coronavirus, but they embarrassed themselves on the Champions League stage as they suffered a humiliating 8-2 defeat to Bayern Munich.

Furthermore, reports suggest new coach Ronald Koeman has not endeared himself to the players by freezing long-time team-mate Luis Suarez out of his plans.

“Messi is a player who strives for maximum success,” Freixa explained. “He alone cannot achieve maximum success, he needs a team for that. He does not have one. Since the treble in 2015, Champions League success is missing. That is what concerns him. His decision is due to the negative sporting development of the team in recent years.”

It is probable that Messi winds up reuniting with former Barca coach Guardiola in England.

“I think a move to Man City is likely,” Freixa said. “With Pep, Messi experienced his most brilliant years in Barcelona. It would only be logical if both of them worked together again. City, like almost all English clubs, also has the financial means to build a team that can win anything.”

He sees this crossroads, however, as an opportunity for Barcelona to move forward into a new era.

“In life everything comes to an end at some point, and even if there will no longer be a player like Messi, his departure would be a chance for Barca to develop into a team that is less dependent on a single player,” he said.

“Messi's influence on Barca's game has been immense in recent years. The style of play was designed to give him the ball and hope that he would do something magical with it. Without him, the collective would be more in demand again. That can also be liberating.”

Messi is Barca’s record goal scorer, having found the net for the club 634 times in 731 outings.

Olympics 2020 Begins With Gold For China And More Covid-19 Cases By Agencies 3 hours, 45 minutes ago

Tokyo Olympics Opening Ceremony To Be Held On Friday By Agencies 2 days, 12 hours ago

Suga To Meet Dignitaries Arriving For Games By Agencies 3 days, 12 hours ago