Bhotojatra Festival Will Not Be Held This Year

Bhotojatra Festival Will Not Be Held This Year 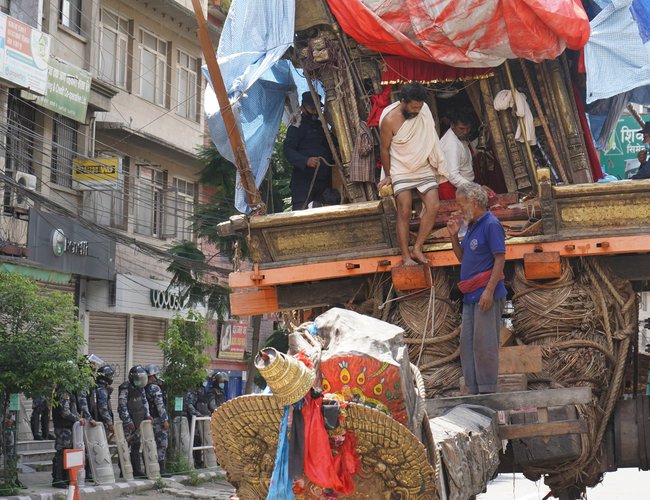 The Bhotojatra festival associated with Bunga Dyo or Rato Machchhindranath, the deity of rain and good harvest, is not going to take place this year owing to the risk of the coronavirus pandemic reports RSS.

According to RSS. Chandra Maharjan, the coordinator of Bugadyah Jatra Vyawasthapan Karyadal, 19th Jatiya Khala Puchah, the task force for the management of the traditional festival, said that an atonement worship of the Karunamaya would be held today to supplicate for forgiveness as the ritual could not be conducted this time due to the coronavirus pandemic.

According to him, all the ritualistic procedures related to the Machchhindranath festival would be conducted at the site where the chariot is presently parked and in the coming years the festival rituals would be held as in the previous years.

Maharjan said an unrelated group tried to pull the chariot on Thursday without any authorisation which led to a tense situation and condemned this reports RSS.

He added that a special meeting of the stakeholders related to the Rato Machchhindranath chariot procession festival held on August 27 at the Jyapu Samaj Yala had made a gentleman's agreement to conclude the festival before the Malamas (inauspicious period).

The caste groups would get the conclusion drawn after consulting the expert of the Guthi sansthan Head Office ratified at another meeting to be held in the presence of representatives of all stakeholders and to conduct the chariot procession festival accordingly.

The image of the Aryavalokiteshwora or the Rato Machchhindranath deity was mounted on the chariot constructed at Pulchowk on July 25. As per the time honoured tradition, the chariot is pulled on the fourth day of installing the deity's image in the chariot amidst a religious procession from Pulchowk to Jawalakhel via Gabahal, Mangal Bazaar, Sundhara, Lagankhel and then finally to Jawalakhel, where the ritualistic Bhoto jatra used to be organised.

As part of the Bhotojatra festival, the 'bhoto' or the gem-studded vest believed to be that of the Rato Machchhindranath deity is displayed for viewing by the public from atop the tall tower of the chariot.

Historical records show that a king named Bardev had commissioned the construction of the chariot of the deity in 800 BS (1,277 years ago). The chariot's construction had begun 84 years after the Machchhindranath's arrival in Nepal.

It is believed that the Machchhindranath was brought from Kamarukamakshya of India.

Then king of Bhaktapur, Narendradev, then king of Kathmandu, Bandhudatta Bajracharya and a farmer of Lalitpur, Lalit Rathchakra together brought the deity to Nepal from India.

The situation of Lalitpur has been brought to control on Friday after the Lalitpur District Administration Office imposed curfew inside the ring road in Lalitpur district.

Following the clash between the police and the locals of Patan, demanding the procession of Rato Machindranath Chariot, on Thursday afternoon, the Lalitpur DAO had on Thursday itself decided to impose curfew from 4:00 am to 10:00 pm on Friday.

Senior Superintendent of Police (SSP) Sushil Kumar Yadav, spokesperson of the Metropolitan Police Office Lalitpur said that the situation of Lalitpur was normal on Friday.

“The curfew is being imposed effectively. We have arrested nine individuals who were involved in attacking a traffic police on Thursday,” said SSP Yadav.

Chyama Puja, the ritual seeking forgiveness, is being conducted in the Patan area, he added.

Likewise, the meeting of the stakeholders, local representatives held on Thursday had condemned the riot, clarifying that the local Guthis weren’t involved in the clash.

The meeting also decided to cancel Bhoto Jatra for this year.

Swasthanibrathakatha To Conclude Today By Agencies 3 days, 8 hours ago