Foreign Governments Can Purchase Vaccines From China In The Case Of An Emergency: Sinovac

Foreign Governments Can Purchase Vaccines From China In The Case Of An Emergency: Sinovac 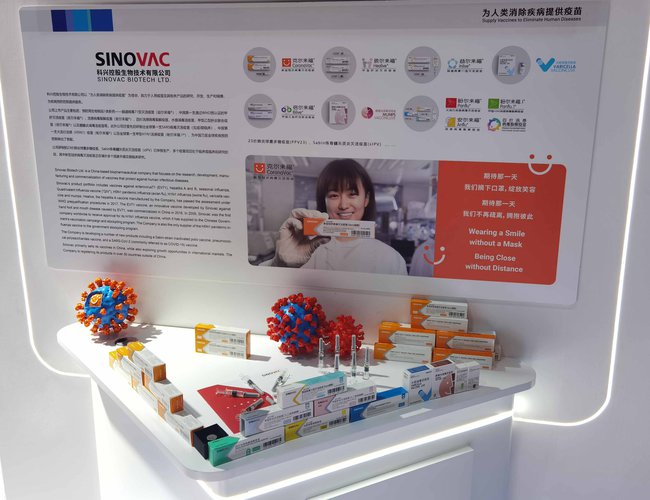 Two Chinese pharmaceutical companies are displaying potential COVID-19 vaccines in Beijing from Saturday as part of the ongoing China International Fair for Trade in Services.

One inactivated vaccine candidate, produced by Beijing-based biopharma company Sinovac, has been in phase three clinical trials since July. Phase one and two trials have shown the vaccine safe and effective without serious side effects.

"After performing injections on over 1,000 volunteers, some only showed minor fatigue or discomfort, no more than 5 percent," said Yin Weidong, chairman and CEO of Sinovac Biotech Ltd. "Fever is a major index by which we evaluate a vaccine's safety, that limited to about 2 to 3 percent. As for effectiveness, after two injections, almost all volunteers developed antibodies, around 97 to 98 percent."

To prepare for potential mass production, the company has built a 20,000-square-meter production plant.

Testing in this vaccine facility began on June 30. From cultivating the virus to final packaging, one vaccine takes more than 40 days to create.

"Our facility has been designed to produce 300 million doses annually. This capacity can meet domestic demand and some countries' demand. So we have promised some countries that they can enjoy the same priority as China. That means the 300 million capacity will be provided to countries with high infection rates, including Indonesia," said Yin.

Along with Sinovac's vaccine, China has three other COVID-19 vaccine candidates that have entered phase three clinical trials, making up half of the world's six.

"The phase three clinical trials haven't been completed, and the vaccine has not officially been approved and marketed as of yet. But as a commodity, in the case of an emergency, foreign governments can purchase vaccines from us. There's no obstacle to such purchases. We'll supply the vaccine to whoever buys it. This is in compliance with the law," said Liu Jingzhen, chairman of Sinopharm.

If things go well, these two vaccines are expected to enter the market by the end of this year, according to the developers.

India To Supply Bhutan AstraZeneca And Oxford University Vaccine From Tomorrow By REUTERS 1 day, 6 hours ago