Historic Peace Talks Between The Taliban And The Afghan Government Begins

Historic Peace Talks Between The Taliban And The Afghan Government Begins 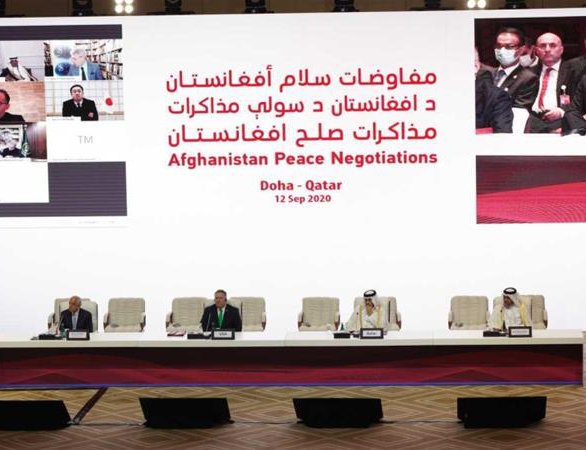 Representatives from several countries participated in the opening ceremony of historic talks that began in Doha.

Historic peace talks between the Taliban and the Afghan government have opened in Qatar, with the warring parties meeting face-to-face for the first time to end nearly two decades of conflict.

At the opening ceremony of the talks in Doha on Saturday, top diplomats from several other countries, including the United States, and representatives from global bodies such as the United Nations, made their opening remarks, many of them virtually because of the coronavirus restrictions.

In the negotiations that begin on Monday, the Afghan sides are expected to tackle issues including terms of a permanent ceasefire, the rights of women and minorities, and the disarming of tens of thousands of Taliban fighters and militias loyal to warlords, some of them aligned with the government.

They are also expected to discuss constitutional changes and power-sharing during the talks in Doha, where the Taliban maintains a political office.

What’s at stake in the intra-Afghan talks?

The peace talks began a day after the 19th anniversary of the September 11 attacks in the US, which triggered its military involvement in Afghanistan in 2001.

Negotiations to broker a comprehensive peace deal were envisaged in a troop withdrawal pact signed between the US and the Taliban in February.

In his opening speech, Sheikh Mohammed bin Abdulrahman Al Thani, the foreign minister of host Qatar, asked the Afghan parties to keep an open mind during the talks.

He said the long-warring parties "must make the decisive decision in line with the current challenges and rise above all forms of divisions and honour the ambitions and aspirations of their people … by reaching an agreement on the basis of no victor and no vanquished".

"I hope you agree with me that today we must overcome the past and its pains ... and focus on the future and the hope it brings us while surely drawing lessons from the past," he said.

US Secretary of State Mike Pompeo said the talks are expected to be contentious, adding that the outcome is entirely up to the Afghans, and not the US.

"Each of you carry a great responsibility," he told the participants. "You have an opportunity to overcome your divisions.

"We will undoubtedly counter many challenges in the talks over the coming days, weeks and months. Remember you are acting not only for this generation of Afghans but for future generations as well, your children and your grandchildren," he said.

In his opening remarks, Pakistan's foreign minister warned the Afghans against foreign meddling in their negotiations.

"Forthcoming negotiations are for the Afghans to decide about their future. Afghans alone must be the masters of their destiny without outside influence or interference. Constant vigilance will be required to guard against their machinations," Shah Mahmood Qureshi said via video conference.

"Pakistan Prime Minister Imran Khan has long maintained that there is no military solution to the conflict in Afghanistan. Political solution is the only way forward," he said, adding that he is "gratified that our perspective is now widely shared across the international community".

Turkey's foreign minister hailed the peace talks, describing them as a real chance for peace in Afghanistan, and calling for a fair and lasting deal at the end of the process.

"After decades-long conflict, there is a now a real chance for peace. We hope that this historic chance will not be missed and negotiation process lead to a lasting peace agreement," Mevlut Cavusoglu said.

Bangladesh To Give Duty Free Access To 16 More Bhutanese Products By Agencies 16 hours, 40 minutes ago

Bhutanese Monk Decided To Bar Visitors From Religious Dance Due To COVID-19 By NEW SPOTLIGHT ONLINE 1 week, 1 day ago