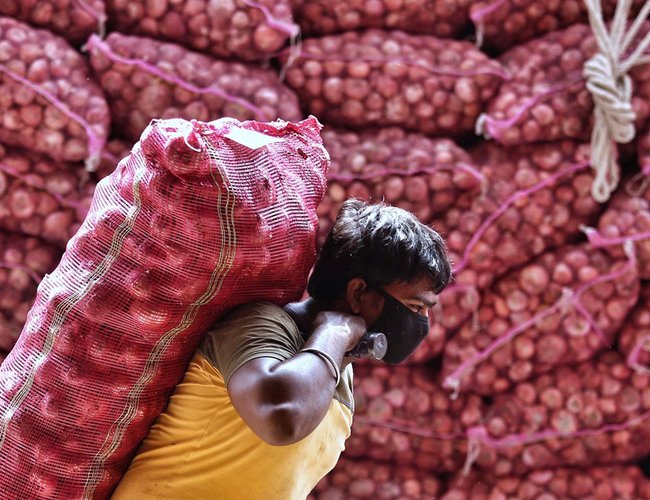 Onion prices in Nepal jumped by more than double on Thursday, following a ban on exports by largest supplier India after its crop was damaged and harvesting delayed by excessive rain.

The surprise move, which took immediate effect on Monday, could help cut prices in India, but boost prices in Nepal.

Retail prices of the root vegetable, a staple of subcontinental cuisine, jumped in Rs. 100, from 40 taka on Tuesday. "Many trucks are standing on the Indian side with onions and Indian authorities did not allow to enter Nepal," said a trader. "Now we are wondering what will happen to those supplies."

India is the biggest supplier of onions to Nepal, which buys a yearly average of more than 50,000 tonnes. Onion prices in Nepal had jumped to a record Rs. 200 in 2019 after a similar Indian ban forced the government to fly in onions. Now, Nepal is turning to other countries for supplies including China, said Minster if Industry, Commerce and Supply Lekha Raj Bhatta. "Our target is to import onions in the shortest possible.”

"The government will use diplomatic channel to import onion from India as well as China. “

In India, prices have tripled in a month to Rs 30 a kg as the summer-sown onion crop in the southern states of Karnataka and Andhra Pradesh was damaged by excessive rainfall, traders said. India's key onion-producing states have received as much as 41% more rainfall than normal since the monsoon season began on June 1.

The World Bank To Provide US$ 45 Million To Promote Sustainable Livelihoods By NEW SPOTLIGHT ONLINE 3 hours, 7 minutes ago

TIA To Open Only 18 And Half Hours From March 28 By Agencies 4 hours, 2 minutes ago

NIBL Opens its 87 Branch In Lahan By NEW SPOTLIGHT ONLINE 3 days, 2 hours ago