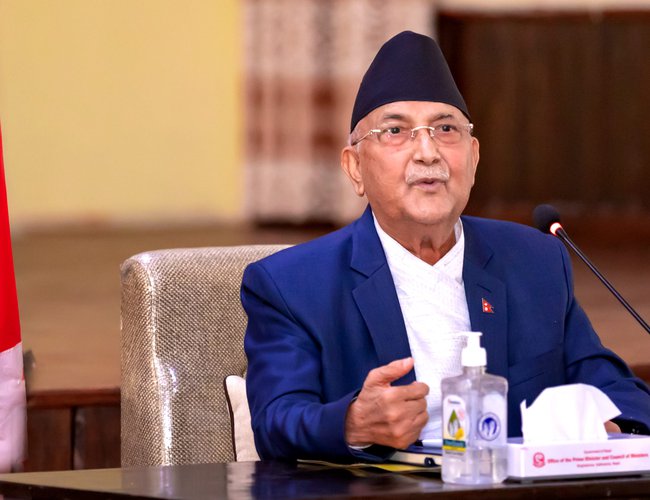 Prime Minister KP Sharma Oli has said that the government was ready to amend the constitution if required in course of its implementation reports RSS.

He said, "Some topics of the Constitution can be amended in course of bringing it into right implem entation in practice. The government is ready for the same."

According to national new agency, PM Oli further said that agenda of constitution amendment should not be brought as an individual's interest, adding that the constitution has the power to unite all over the issue of nationality.

He also presented the example of unity of all in course of issuing the new political map of the country.

He opined that the Constitution, which has given priority to humanitarian security, civilization and development, has clearly reflected the goal of prosperity as well as humane and developed scientific socialism.

Urging to understand socialism as social justice, equality and participation of all in achievements, the PM clarified that such society would have openness, peace, security, rule of law and good governance reports RSS.

Similarly, Nepali Congress leader Dr Ram Sharan Mahat said that the Constitution of Nepal is the best constitution as compared to other developing countries as it was brought focusing on justifiable and inclusive society with fundamental characters.

Also the former Finance Minister, Mahat shared that building an efficient administration and capacity of local levels is now a challenge as the constitution has empowered local levels.

The volume is edited by constitutionalist Bipin Adhikari, who highlights the importance of interpretation and analysis of the Constitution of Nepal, 2015 for its proper implementation. He writes,

"This is one of the youngest constitutions of the world and represents the hopes and aspirations of the people as voiced through not one, but two Constituent Assemblies.

It is significant that we are publishing this volume on the 5th anniversary of the Constitution's promulgation in September 2015."

The volume launched today is simultaneously a commentary on the new Constitution as well as report on the international conference on the Constitution of Nepal, 2015, which was held from August 11-13, 2018.

The volume contains a review of the Constitution's provisions, a summary of the proceedings, as well as individual essays by 29 contributors—framers of the Constitution, jurists, constitutionalist, social scientists and practitioners from Nepal, South Asia and overseas. Overall, the essays make a call for the implementation of the Constitution according to its letter and spirit.

Likewise, Kanakmani Dixit, who had participated in international conference and book publishing, suggested translating the book in foreign languages by further expanding constitution's implementation and explanation.

DASHAIN : Mother Of All Festivals By Reezan Poudel 1 week, 2 days ago

JAPAN’S SUPPORT School Reconstruction By A Correspondent 1 week, 2 days ago

City Of Subhuman By Deepak Raj Joshi 1 week, 2 days ago