BP Koirala said a constitution is nothing more than a piece of paper if nobody abides to it. 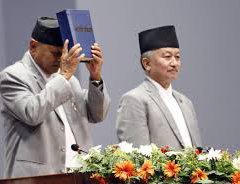 Five years has passed since the promulgation of Constitution of Nepal 2015, nothing has changed and no political leaders have shown complete thrust on it. Politicians have been using the constitution to grab the power and interpretations make to suit their own interest. Although it has already amended twice, the constitution is yet accepted by all. A violent rebel against the constitution has already started by a faction of Maoist. and other ethinic groups.

When president Dr. Ram Baran Yadav promulgated the new constitution from Birendra International Convention Center (BICC) five years ago defying suggestion of Nepal’s neighbor, there was joy and happiness inside the hall, where the constitution received a thunderous welcome. The next hour all the students loyal to the three ruling parties celebrated the promulgation of constitution as an historic and life-time achievement.

Political leaders of the three big parties, civil society leaders affiliated with them and students and young political forces showed up in streets with flags and candles. Similarly, business communities welcomed it as an opportunity for an all-round economic development.

Today, there is more frustrations and disenchantment among the people and the celebration of constitution day is merely confined to the political parties which supported the promulgation.

Promulgated defying all constitutional norms and law, many people regards the document is merely a piece of paper. Although parties opppositng the constitution join in the main stream, there are disenchantment in the Southern Nepal where more than 60 people died in the protest against the constitution. People are yet to heal their wound.

However, none of the constitutions has survived for an adequate time. All the previous constitutions died because of failure of Nepalese leaders to stick to institutions and rule of law. One after another, these constitutions were burnt whenever the opposition felt betrayed.

This time also, similar forces have appeared to threaten the longevity of the constitution. Instead of warm welcome or candle light, the constitution was put in fire on the same evening with blackout in half of the country. This has indicated that the new constitution is likely to face a number of challenges in its implementation.

Along with Madhesis, Tharus and disgruntled Janajatis, Dalits and Hindu religious groups are opposing the constitution. And the opposition is gradually increasing expanding as the groups join hands with one another to press the rulers in Kathmandu.

In a process for trip rate agreement, India handed over an eight-point memorandum to Rana’s representatives on 8 December 1950 which said that a Constituent Assembly, composed entirely of properly elected members, should be brought into being as soon as possible to draw up a constitution for Nepal.

After dismissal of 1960 Constitution, King Mahendra proclaimed Constitution of Nepal 1962. Then, Constitution of Kingdom of Nepal 1990 was promulgated and, before long, the Constituent Assembly demand rose again following the announcement of People’s War in 1996 by Maoist Party.

The present Constituent Assembly became possible only after the signing of the 12-point agreement in November 2005 between the seven-party alliance and Maoists in New Delhi through an Indian brokered peace agreement.

It was expected that promulgation of Federal, Democratic, Republic, Secular and Inclusive constitution creates a conducive and peaceful environment in Nepal.

The challenge for the constitution now is to accommodate the left out and disgruntled people, giving them space. Other challenges for the new constitution are to erase the divisions between hills and Terai on the constitution. With disrespect in the process and promulgation of constitution in Terai, there was celebration in capital Kathmandu and many hill cities.

“After years of political infighting, Nepal has adopted a constitution creating a federal state. But for it to become a success the nation must also tackle issues affecting women and minorities,” said George Vaurgese.

PM Deuba Received A Telephone Call from US Secretary Of State By NEW SPOTLIGHT ONLINE 3 days, 3 hours ago