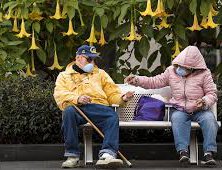 The following is a roundup of some of the latest scientific studies on the novel coronavirus and efforts to find treatments and vaccines for COVID-19, the illness caused by the virus.

A lower supply of a certain type of immune cell in older people that is critical to fighting foreign invaders may help explain their vulnerability to severe COVID-19, scientists say. When germs enter the body, the initial “innate” immune response generates inflammation not specifically targeted at the bacteria or virus.

Within days, the more precise “adaptive” immune response starts generating antibodies against the invader along with T cells that either assist in antibody production or seek out and attack infected cells.

In a small study published on Wednesday in Cell, COVID-19 patients with milder disease had better adaptive immune responses, and in particular, stronger T-cell responses to the coronavirus.

People over age 65 were much more likely to have poor T cell responses, and a poorly coordinated immune response in general, coauthor Shane Crotty of the La Jolla Institute for Immunology said in a news release.

As we age, our supply of "naive" T cells shrinks, he explained. Put another way, we have fewer "inexperienced" T cells available to be activated to respond to a new invader. "Ageing and scarcity of naive T cells may be linked risk factors for failure to generate a coordinated adaptive immune response, resulting in increased susceptibility to severe COVID-19," the researchers said. (bit.ly/3ks4FbG)

In test tube experiments, a team of ear, nose and throat doctors found that a povidone-iodine nasal spray inactivated the virus in as little as 15 seconds. The nasal spray they tested is typically used to disinfect the inside of the nose before surgery. Formulations designed for use on skin are not safe in the nose, the researchers note.

They reported on Thursday in JAMA Otolaryngology - Head and Neck Surgery that they now have their patients use the spray before intranasal procedures, to reduce the risk of virus transmission through the air via droplets and aerosol spread.

They also suggest instructing patients to perform nasal decontamination before coming to appointments, to "further decrease intranasal viral load and ... prevent spread in waiting areas and other common areas." They caution, however, that routine use of povidone-iodine would not be safe for some people, including pregnant women and patients with thyroid conditions. Larger clinical trials have not yet proved that viral transmission is curbed by intranasal povidone-iodine solutions, but "these studies are already underway," the researchers said. (bit.ly/2RGjMSm)

Not all COVID-19 antibody tests are equal

Some COVID-19 antibody tests are much more reliable than others. But even with the best ones, reliability varies among patient subgroups, a new study suggests. Some tests look for IgM or IgA antibodies, the first antibodies produced by the immune system in response to an invader, which do not remain long in the body.

Other tests - the most common kind - look for IgG antibodies, which generally develop within seven to 10 days after symptoms begin and remain in the blood for some time after the patient recovers.

In a study posted on medRxiv on Wednesday in advance of peer review, researchers analyzed data from 11,809 individuals whose COVID-19 had been diagnosed with highly rated tests to see how well the various antibody assays would “recall” that the patient had been infected.

The most commonly used assays, which look for IgG, had a 91.2% recall rate. But the IgA and IgM assays had estimated recall rates of 20.6% and 27.3%, respectively, coauthor Natalie Sheils of UnitedHealth Group told Reuters. "Recall varies significantly across subpopulations and according to timing of the tests, with performance becoming relatively stable after day 14," she said. "The tests performed better for men versus women, for non-whites versus whites and for individuals above age 45." More research is needed to understand why these variations occur, Sheils added. (bit.ly/32FsiHD)