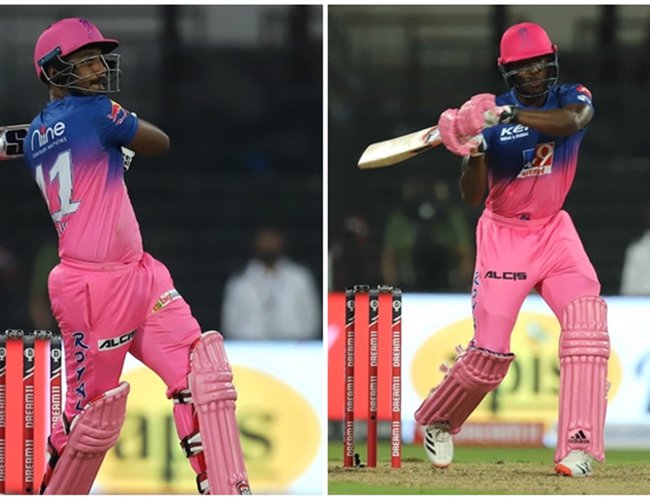 Sanju Samson finished his innings with nine mammoth sixes as he raced to a 32-ball 74 for Rajasthan Royals versus Chennai Super Kings.

Sanju Samson produced an absolute blitzkrieg in Sharjah against Chennai Super Kings (CSK) as he raced to a 32-ball 74 for Rajasthan Royals (RR) after coming at one down on Tuesday.

The 25-year-old wicketkeeper-batsman scored the joint second-fastest fifty for RR in the Indian Premier League (IPL). Both him and Owais Shah (vs RCB in 2012) have scored 19-ball fifties, and the pair is only bettered by Jos Buttler’s 18-ball half-century against Delhi Daredevils in 2019.

After CSK won the toss and chose to field first, Steve Smith and India’s U19 star Yashasvi Jaiswal opened the innings for RR. After the rookie’s dismissal in the third over, the Kerala big-hitter came on at number three.

Samson started slow but his batting show began in the fifth over when he smacked Sam Curran for 14 runs, hitting a four and a massive six in the process. Using his strong upper body, the right-hander went berserk clearing the ropes with ease.

To break the growing partnership between Smith and Samson, CSK captain MS Dhoni introduced his spinners, but Samson took them to the cleaners, especially the veteran Piyush Chawla.

In the eighth over, Samson scored a 19-ball fifty after hitting Chawla for 28 runs with the help of Smith. He continued to torment both Chawla and Ravindra Jadeja, before being dismissed by Lungi Ngidi in the 12th over when RR was 132/2.