14 Killed And 7 Missing In Landslides And Floods

14 Killed And 7 Missing In Landslides And Floods 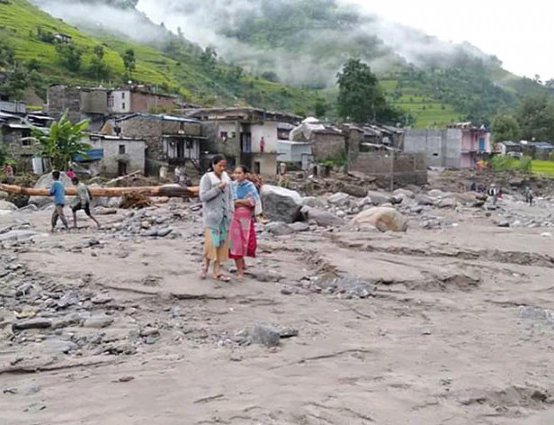 At least 14 people were killed, seven others went missing and three injured in landslides and floods triggered by incessant rains in different parts of the country on Thursday reports The Rising Nepal.

Quoting Joint Secretary and spokesperson Murari Wosti of the National Disaster Risk Reduction Management Authority (NDRRMA), the daily says 10 people were killed in two separate landslides in Syangja district, and one each in Palpa, Baglung, Dhankuta and Kapilvastu districts.

Nine members of the same family were killed and one was injured when a landslide buried their house in Tamadi early Thursday morning, he said.

Similarly, 17-year-old Bishnu Pariyar, son of Baburam, when a landslide occurred after incessant rains at 4 Birgha Gautam Tole of Kaligandaki Rural Municipality-4, said an official. The landslide hit the house of Pariyar while he was sleeping in it while the condition of others in the house is normal.

Meanwhile, a woman died and five members of a family went missing in Rambha Rural Municipality-2, Belanjna and Surungdanda of Palpa district after a massive landslide triggered by incessant rainfall buried two houses on Wednesday night.

According to the District Police Office, Palpa, 27-year-old Motisara Gaha, of Surungdanda, died when the landslide crushed her. However, Gaha’s husband and a son were able to escape the landslide that occurred at 1:30 a.m. on Wednesday night.

A spokesperson at Rambha Rural Municipality Krishna Prasad Regmi said search and rescue efforts had come to a halt as the landslide continued due to the incessant rainfall.

Similarly, five persons were injured as a landslide triggered by incessant rains buried three vehicles at Bhattedanda along the Kanti Lokpath in Lalitpur district on Thursday morning. According to the Lalitpur Metropolitan Police Range, the landslide, which occurred at Bhattedanda, buried two tippers and a motorcycle. Of the injured, one is critical, while the rest are out of danger, Lalitpur Police Office said.

48 Killed, 31 Missing And Hundred Displaced By The Recent Floods By NEW SPOTLIGHT ONLINE 6 months, 4 weeks ago