With no job back home, large numbers of Nepalese migrant workers are returning India in search of employment 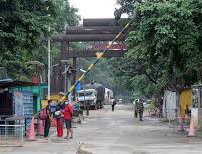 Nepal shares a border with two neighbors India in the South and China in the north. Following the spread of coronavirus, Nepal completely shut down the border with China and India.

With insistence from Chinese authorities, Nepal’s two main trading port with China is yet to open. Goods worth of billions of rupees has been laying the Chinese side of the borders due to border shut down by Chinese authorities citing the COVID-19.

Although Nepal is yet to officially open its border with Southern neighbor India for the mobility of people, India has allowed desperate Nepalese seeking to back for employment, which is the means of survival of their families.

According to officials, over 300,000 Nepalese have already entered India from four border points including Gaddachauki, Gaurifanta of the far west, Ruapadiya and Sunauli of Province 5.

Coronavirus infections have been surging and there is a threat of infection, people of far-western Nepal, who rely on employment opportunities in India, have started to return for employment. India

As India is a main destination of employment for an overwhelming of Nepalese people in far-west and Karnali province, Province 5 and Gandaki, the remittances generated from India is a source of livelihood.

With no employment opportunity back home, large numbers of Nepalese, who returned home after a lockdown in March, have started to return India. Although Nepal is yet to formally announce the opening of the border, India has been allowing Nepalese migrant workers to return in their place in India.

Thousands of Nepalese migrant workers, who returned in March following the COVID-19 lockdown, have started to go back to India for a job. With no job back home, they moved India ignoring the risk COVID-19.

However, this is not the same with Indian citizens who want to come to Nepal. With a decision of banning borders till October, Indians have to wait to enter Nepal through official borders. Many Indian citizens who have investments in Nepal are now allowed to work.

Demand For Resumption Of Flights

As the border has opened for human mobility, there is also growing pressure to open flights. Although it will benefit large numbers of people from both the side to reunion and business, some prominent personalities have already requested to resume flights at least by Nepal Airlines and Air India.

Former election commissioner Ila Sharma on Sep 24 twitted. “There are many citizens of both countries who are stranded in one or another. People working across the borders, people who have families across borders. Resumption of @NepalembassyIndia @nilacharya regular flight would be such a great help! especially the Nepal Airlines and Air India flights! Please!” Twitter Link

Despite opening the airport from other countries, Nepal is yet to resume its flight service with India.

Amid the COVID-19 pandemic, the Nepali returnees from India have now started going back to India because of the lack of food and employment at home despite the risk of contraction of the virus.

Dinesh Thakhulla, an official at the Citizen Help Desk at Trinagar border in Dhangadhi, Kailali, said, “In recent times, more than 1000 migrant workers are returning to India in a day.”

The police deployed at Trinagar post said that the migrant workers go to Mumbai, Pune, Delhi, and Lucknow through the Gaurifanta border point. As the number of Nepalis going back to India has increased, Indian authorities at the Indian border side have made it compulsory to show the ration card or Nepalese citizenship to enter India.

“It’s easier to fight the virus than hunger. So I am going to work in India as a migrant worker,” said Kripa Ram Niraula, 50, a resident of Punarbas Municipality- 6, Kanchanpur, who has been a migrant worker in India for 22 years. Niraula made the comment while entering India through the Ghaurifanta border point.

Another migrant worker, Kemraj Chaudhary of Bardagoriya, Kailali, who has been working in India for the last 6 years, said, "If I do not go to India for earning, then my family of four will die from hunger.” He is more worried about unemployment than getting infected with the virus.

Raj Kumar Chaudhary of Ghoda Ghodi Municipality-3, who has been working in India for the last 15 years, said, "I am returning to India because of the lack of the job opportunities here in the home country, Nepal.

Lokendra used to work at a shopping complex in New Delhi as a security guard for the last five years and had returned four months ago. Others like him too had to leave their jobs in India to return to their hometowns.

"Malls have opened in India. I got to join my duty. It has been four months since I reached Nepal to skip the pandemic but I have got nothing to do here. At least I have a job in India with which I am able to meet the expenses of my family. I am therefore thinking about returning to India for the work which is there for me. My employer has been for a week asking me to return, so I am off to New Delhi," Lokendra said.

More than a thousand workers from Nepal have been crossing the Customs at Kailali District of Southern Plain of Nepal to rejoin their jobs in India.

Although the exact number of Nepali migrant workers is not recorded by any of government institutions, thousands of Nepali are working in India. People of various age groups go to India on annual basis mainly from Far-Western Nepal which has become a means of living for them.

As it does not require a visa or permit to work in India, various cities there have been job centers for Nepali workers. Likewise, thousands of Indian workers from Bihar and Uttar Pradesh also crossed the border to work in various sectors in Nepal recently.

With the rise in COVID-19 cases in India during the month of March and the imposition of lockdown in India, more than two hundred thousand Nepali migrant workers had returned back to Nepal. Now with business falling back to track in India despite the rising number of cases in India, Nepali workers despite knowing the risk are flocking to India for jobs.

With the economy in India gathering pace again, thousands of workers from Nepal have been crossing the customs point at Kailali District of Southern Plain of Nepal to rejoin their jobs in India.

Since there are no visa requirements to work in India, various cities have been job centers for Nepali workers.

The ANI report carried by Business Standard said that people of various age groups go to India on an annual basis mainly from far-western Nepal which has become a means of living for them.

The report quoted a migrant worker as saying, “Malls have opened in India. I got to join my duty. It has been four months since I reached Nepal to skip the pandemic but I have got nothing to do here. At least I have a job in India with which I am able to meet the expenses of my family. I am therefore thinking about returning to India for the work which is there for me. My employer has been for a week asking me to return, so I am off to New Delhi.”

The Covid-19 lockdown in March had made more than 2,00,000 Nepali migrant workers return to Nepal. However, with the business falling back to track in India, despite the increasing number of cases, Nepali workers are flocking to India for jobs, said the report.

India registered the highest single-day spike of 90, 802 new coronavirus cases today, taking the national caseload past the 42-lakh mark, according to the Union Ministry of Health and Family Welfare.

After pressure from the public and officials, the Chinese side has announced opening two border points with Nepal. Due to restrictions including mandatory PCR tests and other provisions, transporting goods will not easy.

Delaying in the opening of the Rasuwagdhi border point between Nepal and China has badly affected the construction of hydro-power and transmission lines projects in Nepal.

If the obstruction in importing the equipment continues, it will increase the cost equivalent to billion of rupees of the projects. Most of the equipment stranded in Kerung is imported by the Nepal Electricity Authority and its subsidiaries.

With the border of China’s Kerung shutdown, over 500 heavy trucks loaded with equipment for hydro-power projects and transmission line has been stranded in Kerung for almost eight months.

After the spread of Coronavirus in China, Nepal shutdown the Rasuwagadhi transit point. However, the situation is reversed now as China has shut down the border to stop the spread of viruses from Nepal.

More than thousands of Nepal-bound cargo trucks have remained stuck at the Nepal-China borders as the Chinese authorities are reluctant to allow cargo movement via the land routes.

Both Nepal-China border points of Rasuwagadhi-Kerung and Tatopani-Khasa have remained closed since late January to prevent the possible spread of coronavirus which was first detected in Wuhan of Hubei Province of China in late 2019. Over the period, these trade points were opened only for a few days allowing the movement of a limited number of cargo trucks carrying medical kits in particular.

Traders have been demanding that the government authorities take initiatives to hold talks with the Chinese government regarding the matter. According to Nepal National Entrepreneurs Federation, more than 1,000 trucks loaded with imported goods have remained stuck in Kerung alone.

Officials at the Ministry of Industry, Commerce and Supplies said the northern neighbor paid no response despite repeated requests for reopening these border points. Citing the spike in coronavirus cases in Nepal along with weak mechanisms to tackle the pandemic, the Chinese authorities have been avoiding the issue of reopening the borders any time soon, according to the officials.

When China permitted the one-way cross- border movement through the Rasuwagadhi-Kerung transit point for a few days in July, only a limited number of cargo trucks were allowed to leave for Nepal, on the condition of adopting stringent safety measures.

According to traders, the cargo trucks have been carrying mainly construction equipment, electronic devices and Dashain-targeted goods.

Chief of Rasuwa Customs, Punya Bikram Khadka said four trucks will be allowed to operate in the beginning and the number will be continuously increased as the service improves, My Republic newspaper reported. Out of the many goods imported from China, fruits, readymade goods, electronic gadgets, equipment required by telecom and hydropower projects are among the prominently imported ones, the report said. Also Reads