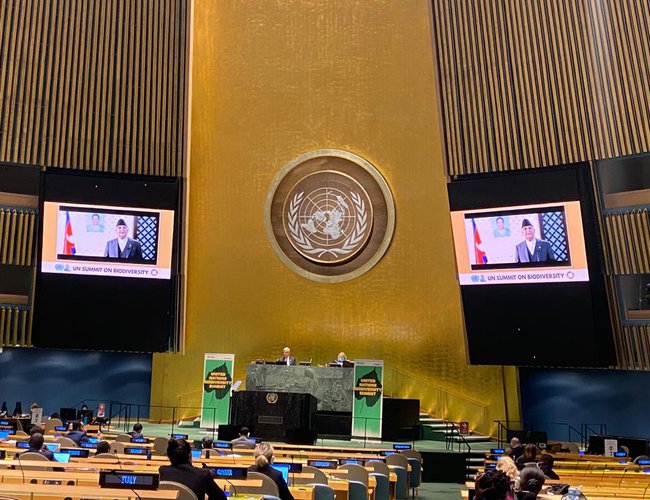 Addressing the ‘UN Summit on Biodiversity’ held today on the margins of the 75th Session of the UN General Assembly, he dubbed biodiversity resources as humanity’s common lifeline connecting generations and surpassing national boundaries.

The Prime Minister said that Nepal accorded high priority to biodiversity conservation. Living in harmony with nature is a part of Nepali Culture. Biodiversity protection constitutes a critical component of Nepal's aspiration of ‘Prosperous Nepal, Happy Nepali’, he stated.

He underlined the unique mountain ecosystem of Nepal as the true source of knowledge to inquisitive scholars, researchers, and scientists. He also shared the major achievements and success stories of Nepal in biodiversity conservation and underscored the need to harmonize the efforts under multilateral agreements and internationally agreed on development frameworks.

Emphasizing climate action as a moral obligation, the Prime Minister called for requisite political will, innovative ideas, and robust action from all stakeholders in biodiversity conservation.

The Summit held virtually under the theme of ‘Urgent Action on Biodiversity for Sustainable Development’, featured a total of 144 speakers including 67 Heads of State/Government and 68 Ministers.

I begin by thanking the Secretary-General of the United Nations for convening this important summit.

Biodiversity resources are a lifeline for us. They provide fresh air, clean water, food and livelihood, mineral and medicine, and help sustain human life and economy.

Living in harmony with nature is part of Nepali culture.

Our ancient sages and saints have passed down valuable knowledge of biodiversity and taught us the value of its conservation.

Therefore, Nepal accords high priority to biodiversity conservation and has made good progress.

Twenty-three percent of our geography has been designated as a protected area and we have achieved Aichi Target – 11. We now plan to expand it to 30 percent by 2030. 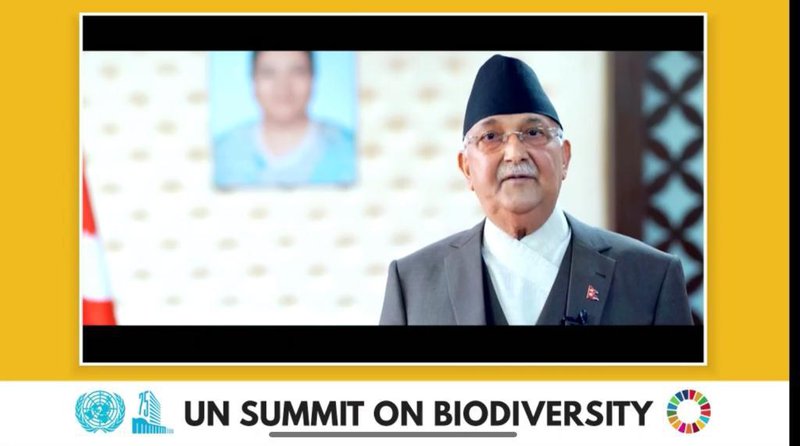 Nepal's progress in landscape-level conservation and transboundary cooperation on migratory species are considered as success stories. So is the engagement of communities to managing human-wildlife conflict.

The availability of clean energy from hydro-electricity has reduced stress on biodiversity.

Through a strong law enforcement system and enhanced cooperation at the international level, we have achieved zero-poaching of rhino for almost a decade.

We have almost doubled the number of tigers well ahead of the target year of 2022.

The world can learn from our experience.

Nepal’s mountain ecosystem is a unique laboratory and a true source of knowledge to inquisitive scholars, researchers and scientists. Mountain ecosystems make critical common property resources for the benefit of humanity which extends beyond our borders.

It is a multi-stakeholder business that requires commitment and action from all actors nationally and internationally.

We need to set more ambitious targets with the right balance of people’s rights over natural resources and its sustainable protection.

Implementing urgent climate action is a moral obligation. We need to harmonize the efforts under multilateral agreements and internationally agreed with development frameworks.

Let us stand united, save this beautiful planet forever for our posterity. We have no right to compromise their future. Let us make it more habitable than today.

Let us muster the requisite political will, promote ideas and innovations and act robustly to conserve biodiversity.

Excerpts of Statement by K P Sharma Oli, Prime Minister of Nepal, at the Biodiversity Summit during the 75th United Nations General Assembly

Excited To Be In Beautiful Nepal: Under Secretary Uzra Zeya By NEW SPOTLIGHT ONLINE 18 hours, 52 minutes ago